About Us > Who we are

The Responsible and Ethical Private Sector Coalition against Trafficking

Babson College’s Initiative on Human Trafficking and Modern Slavery and International Organization for Migration (IOM) jointly with the Global Initiative Against Transnational Organized Crime were the founding organizations of the RESPECT initiative. As of July 2019, the Global Initiative is continuing the hosting of the RESPECT initiative and its activities, such as being the research lead of the Tech Against Trafficking Initiative and the expansion of the Modern Slavery Map.

Founded in 2013 and headquartered in Geneva, the Global Initiative comprises a network of nearly 100 independent global and regional experts working on human rights, democracy, governance, and development issues where organized crime has become increasingly pertinent. It provides a platform to promote greater debate and innovative approaches as the building blocks to an inclusive global strategy against organized crime. It commissions and shares research globally; curates a robust resource library of 2,000 reports and tools specific to organized crime; and uses its tremendous convening power to unite both the private and public sectors against organized crime.

Through a range of channels, the Global Initiative seeks to project the expertise of its Network members outwards and to make it available to a broader range of stakeholders, including through developing tools necessary to further the development of effective human trafficking responses.

Livia Wagner works as the Coordinator for the Network of Experts and Senior Expert at the Global Initiative Against Transnational Organized Crime. As Network Coordinator, she serves as the focal point for a variety of network activities of and engagement with more than 500 network members who are involved in analyzing or countering transnational organized crime.

Livia’s work covers mainly the issue of human trafficking for labour and sexual exploitation, specializing on responsible supply chain management. She has done extensive research on natural resource trafficking, such as illegal gold mining/illegal logging and related organized crime forms with a special focus on Latin America. She also coordinates the Responsible & Ethical Business Coalition against Trafficking (RESPECT) Initiative, and coordinating GI-TOC’s Research Lead for the Tech Against Trafficking Initiative.

Before joining the GI-TOC, she worked several years as international consultant and before that as Private Sector focal point for the United Nations Global Initiative Against Trafficking in Persons (UN.GIFT) and the Non-Governmental Organisation ECPAT on child trafficking for sexual exploitation. She also worked as development official for the Austrian Ministry of Foreign Affairs and the UN Development Programme (UNDP) in Mauritius.

She holds a Master’s Degree in Development Sociology and International Relations from the University of Linz/Austria and is based in Vienna/Austria.

Thi is the Managing Editor of the LSE Press‘s Journal of Illicit Economies and Development (JIED) and Analyst at the Global Initiative Against Transnational Organized Crime (GI-TOC). Thi is also coordinating and managing the International Association for the Study of Organized Crime (IASOC)‘s activities such as IASOC annual prizes, events, and monthly bulletins, and the International Society for the Study of Drug Policy (ISSDP)‘s membership.

Thi works on and co-coordinates the Responsible & Ethical Business Coalition against Trafficking (RESPECT) Initiative, which serves as a platform for thought leaders, practitioners, and policy makers and to mobilise the business community as a strategic partner to tackle human trafficking. Her other projects include the Modern Slavery Map, an interactive map for business of anti-human trafficking organisations, and the Tech Against Trafficking initiative, a coalition of technology companies and stakeholders aiming to help eradicate human trafficking using technology.

Thi also works on and co-ordinates the Drugs & Development Hub (DDH) initiative, jointly launched by the London School of Economics (LSE), the Global Partnership on Drug Policies and Development (GPDPD), and GI-TOC to create new perspectives for integrated drug policies.

Her main areas of interest are human development – especially equity in education and healthcare, women’s empowerment; trafficking of children and women; poverty and humanitarian emergencies. Her regional interests are South Eastern Asia and Africa. She has supported the Global Poverty Project (now Global Citizen) in Wellington, New Zealand; the Austrian Red Cross, Supertramps in Vienna. She is currently a member of the European Consortium for Political Research (ECPR)‘s Standing Group on Organised Crime (SGOC) and supporting the Regional Academy on the United Nations (RAUN) as a Programme Coordinator and the Pacific Links Foundation as a Regional Advisor in her personal capacity.

Christina’s work tackling human trafficking currently concentrates on the role of business, entrepreneurship, and innovation; converging areas of illicit trade; technology as a facilitator and combatant of human trafficking; and organ trafficking. Christina has served in a variety of roles with the World Economic Forum’s Global Agenda Council Network and is a former term member with the Council on Foreign Relations.

She is a member of the Global Initiative Network of Experts with the Global Initiative against Transnational Organized Crime; OECD Task Force on Countering Illicit Trade; Massachusetts Advisory Committee for the U.S. Commission on Civil Rights; Advisory Group for Tech Against Trafficking (with RESPECT); and Board Chair of ArtWorks for Freedom. She is appointed to the Massachusetts Governor’s Council to Address Sexual Assault and Domestic Violence under Governor Charlie Baker and Lieutenant Governor Karyn Polito, where she is Co-Chair of the Human Trafficking Workgroup.

Alcira was born and raised in the south of Spain, and is currently going into her fourth and final year at the University of St Andrews, studying Philosophy and International Relations.

She is deeply interested in labour rights and how they are influenced by the difference in domestic policies across the globe, especially when it comes to women. Alcira is therefore really excited about the opportunity to intern with RESPECT, for it’s allowing her to gain more nuanced insights into the subject.

In her free time Alcira works on an online magazine she founded with a university classmate, reads and spends time with her friends.

While Payton calls New Hampshire her home state, she attends Emmanuel College in Boston, MA. Upon on her return in September, she will be entering  her Junior year. She is currently focused on a Political Science major and Legal Studies minor.

Upon graduation in 2022, her graduate studies will be focused on law school, which she will use to pursue her dream of becoming  a Child Advocate Lawyer.

Payton’s life goal has always been to help the children who don’t have a voice, and she feels through interning at the Respect Initiative she is able to focus on understanding some of the topics that she may be exposed to without her law degree.

She enjoys her spare time with her family and reading a good book. 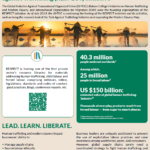