A Typology of Modern Slavery Offences in the UK

This report presents findings from research to create an evidence‐based typology of modern slavery offences in the UK. Modern slavery is an umbrella term that encompasses the offences of human trafficking and slavery, servitude, forced or compulsory labour, as set out in the different anti‐slavery legislation in place in the four UK countries (England, Wales, Scotland and Northern Ireland). Modern slavery frequently involves multiple victims, offenders and places, and it is often hidden and involves or takes place alongside a wide range of abuses and other criminal offences. The Home Office estimated there were 10,000–13,000 potential victims of modern slavery in the UK in 2013.

This research sought to devise a typology of modern slavery offences to improve our understanding of the different ways that modern slavery manifests in the UK and to inform tailored policy and operational responses.

The typology is based on analysis of detailed data on 328 confirmed cases of modern slavery in the UK. As modern slavery is often a hidden crime, these data sources are partial and only cover modern slavery that has come to the attention of the authorities. However, this approach was considered appropriate given the exploratory nature of this research. The typology was refined through consultation with experts including the Joint Slavery and Trafficking Analysis Centre, academics, non‐governmental organisations (NGOs) and frontline staff such as police officers.

The typology identified 17 types of modern slavery offences in the UK (see figure below). It sets out the characteristics of the victims, offenders and offences involved for each type. In particular we looked for how members of law enforcement, other statutory agencies, NGOs and communities may recognise the exploitation and tackle the different manifestations of the crime. Some cases of modern slavery may span multiple types in the typology. This research did not estimate the prevalence of each type of modern slavery. 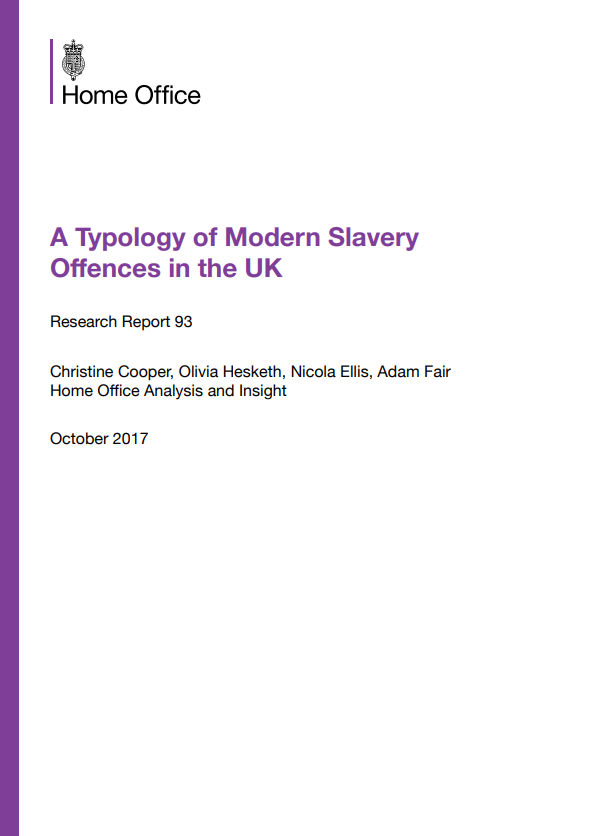 A Typology of Modern Slavery Offences in the UK - Home Office, 2017 DOWNLOAD

In late 2017, the Office of the UN High Commissioner for Human Rights (OHCHR) began receiving increasing allegations by various civil society groups that members of the Uyghur and other predominantly Muslim ethnic minority communities were missing o...Read More

Between 1998 and 2008, several hundred North Koreans worked for roughly ten Czech companies. They were mostly young women employed in the shoemaking, textile, and food industries. Initially, their presence attracted little attention from the media o...Read More