Combatting Human Trafficking since Palermo: What Do We Know about What Works?

In 2016, there were an estimated 40.3 million victims of modern slavery in the world, more than were enslaved during the Transatlantic Slave Trade.

This anti-trafficking work has paid varying degrees of attention to the principles and methods of monitoring, evaluation, and impact assessment, but has often been subject to the end of project evaluations. Similar to findings of reviews of evaluations in the international development sector, evaluations of anti-trafficking programming have primarily focused on assessing the progress of project implementation and the achievement of outputs, rather than tracking the achievement of outcomes or impact.

This is further complicated by the hidden nature of human trafficking and the trauma experienced by human trafficking victims. As a consequence, despite some evidence of raised awareness and increased levels of funding, organizations are still struggling to demonstrate impact and discern what works to combat human trafficking.

This article analyses the evaluations of counter-trafficking programming produced since the Protocol to draw conclusions regarding the lessons learned from these interventions and the methods used to monitor and evaluate human-trafficking programs. By highlighting gaps, this article provides a series of suggestions on how to better track progress and impact toward the elimination of modern slavery. 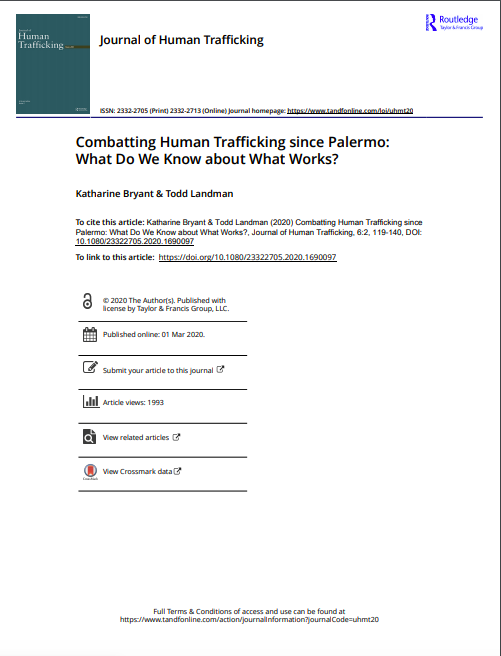 The participation of modern slavery survivors in program development, implementation, and evaluation is crucial to anti-slavery efforts. Working with survivor activists to shape programs based on their lived experience results in developing and...Read More

This report reveals the reality of international labor recruitment for low-wage, temporary jobs in the United States, examining recruitment in Mexico, home to the largest number of temporary migrants who labor under H-2 visas in the U.S. The finding...Read More

The Welsh Government is committed to ensuring workers are treated fairly and with respect and to making Wales hostile to slavery. The Code of Practice – Ethical Employment in Supply Chains is designed to help ensure workers in public sector supply...Read More