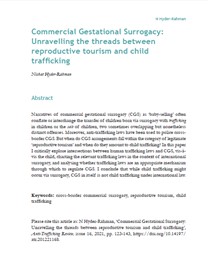 The COVID-19 Pandemic and Workers in Cambodia: A Survey of Suspended Workers in Four Sectors: Garment Manufacturing, Footwear and Travel Foods, Hotels and Guesthouses, and Other Tourism Services

In Cambodia, the COVID-19 pandemic has resulted in widespread job suspensions and losses, and substantial reductions of income for workers and their families. By June 2020, as many as 234 factories in the manufacturing sectors (garment, footwear and...Read More

This Organisational Capacity Assessment Instrument (OCAI) is intended to help you assess and improve your company’s management capacity to manage its human rights impacts. The OCAI consists of a self-assessment questionnaire with 22 questions cent...Read More

The National Survivor Survey is the largest and most significant effort to date to learn directly from survivors of sex and labor trafficking. This report uses the findings from this study to paint a detailed picture of the arc of trafficking – fr...Read More