To mark the third anniversary of the passage of the UK Modern Slavery Act, this report analyzes how companies in this at-risk sector are responding to this legislative requirement. The UK Modern Slavery Act is the most far- reaching global legislation on forced labour and humantrafficking currently in effect, as it affects any globalcompany that has a turnover of £36 million or more and carries out business in the UK. Most notably, it is the first piece of legislation that requires not only annual reporting on the steps taken to address modern slavery in a company’s own operations and supply chains, but also board approval and a director’s signature on the company’s public statement – ensuring that senior management, as well as boards, pay attention to the issue of forced labour.

To understand to what extent the sector is aware of and responding to this legislation, we analyzed large- and medium-size global ICT companies and identified 102companies from Asia, Europe, and the United States required to report under the Modern Slavery Act. We reached out to 23 of those companies that had not published a statement. We also assessed compliance among published statements with the minimum requirements of the Modern Slavery Act: the statement must be linked on the homepage of the company’s website, signed by a director or equivalent, and approved by the board.

We additionally evaluated all the identified ICT companies’statements against KnowTheChain’s benchmark methodology, which comprises seven themes: commitment and governance, traceability and risk assessment, purchasing practices, recruitment, worker voice, monitoring, and remedy. All statements receive a score out of 100. Disappointingly, 85% of the analyzed statements scored below 25. This reporthighlights promising practices, as well as gaps identifiedagainst our methodology, and makes recommendations to companies. 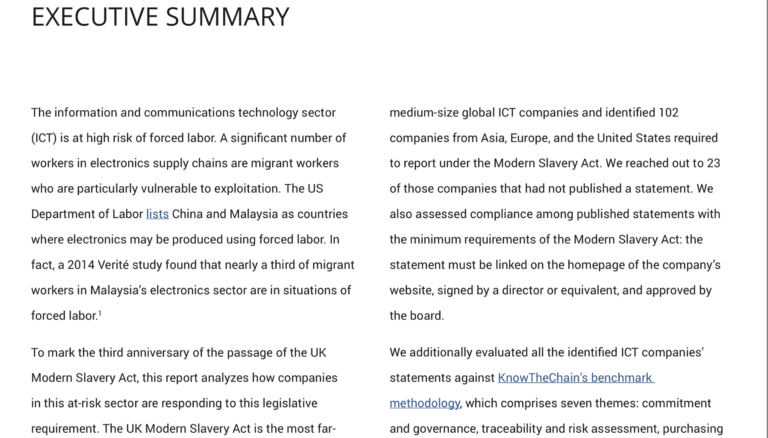 The CT directory gathers key facts and figures about human trafficking in more than 50 countries. It also contains useful contacts to refer the victim or potential victim according to his/her profile: s/he can be in need of immediate protection, nee...Read More

The Responsible Mining Index (RMI) supports the principle that minerals and metals mining should benefit the economies, improve the lives of people and respect the environments of producing countries, while also benefiting mining companies in a fai...Read More