Forced to beg Child trafficking from Guinea-Bissau to Senegal, 2021

ISS and INTERPOL, in affiliation with the Global Initiative Against Transnational Organized Crime.

Taking children from Guinea-Bissau to Senegal and forcing them to beg on the streets has become the most visible form of human trafficking in both countries. Many Quranic teachers and intermediaries’ prey on vulnerable families in Guinea-Bissau. Offering religious instruction in Senegal, they take advantage of families’ ignorance of the fate awaiting their children once they are handed over. This criminal activity enables the teachers, who collect the money given to children as alms, to dispose of a large amount of illicit capital which they inject with impunity into important sectors of the economy such as real estate, trade and transport.

ENACT builds knowledge and skills to enhance Africa’s response to transnational organised crime. ENACT analyses how organised crime affects stability, governance, the rule of law and development in Africa, and works to mitigate its impact. ENACT is implemented by the ISS and INTERPOL, in affiliation with the Global Initiative Against Transnational Organized Crime. 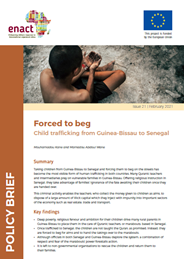 Forced to beg Child trafficking from Guinea-Bissau to Senegal, 2021 DOWNLOAD

Forced Labor — and human trafficking for forced labor — have been documented as recently as 2018 in the cocoa sector in Côte d’Ivoire, with one recent study by the Walk Free Foundation and Tulane University estimating the number of victims at...Read More

2022 List of Goods Produced by Child Labor or Forced Labor

The U.S. Department of Labor (USDOL or the Department) has produced this tenth edition of the List of Goods Produced by Child Labor or Forced Labor in accordance with the Trafficking Victims Protection Reauthorization Act (TVPRA), as amended. Th...Read More