Mapping of Protection Services for Vulnerable People on the Move, Including Victims of Trafficking - On Routes Toward the Central and Western Mediterranean Sea and the Atlantic

Each year, thousands of refugees and migrants are subjected to horrific abuse as they move along different routes within the Sahel and East Africa, and towards North Africa and sometimes on to Europe.3 This includes being subjected to repeated gender-based violence (GBV), kidnappings for ransom, being left for dead in the desert, and many forms of physical and psychological abuse by a range of perpetrators including smugglers, traffickers and sometimes State actors.

In July 2020, UNHCR and the Mixed Migration Centre (MMC) released a joint report highlighting the range of abuses refugees and migrants face as they travel along routes through West and East Africa to Libya and Egypt.7 The report highlighted the primary locations along the routes where refugees and migrants reported that deaths, gender-based violence (GBV), kidnapping, and physical violence took place, based on survey data collected by the MMC’s Mixed Migration Monitoring Mechanism Initiative (4Mi) team in 2018 and 2019. In addition to deaths and violence reported in Libya, refugees and migrants also reported multiple episodes of violence as well as many deaths along the routes through the Sahel and the East and Horn of Africa.

UNHCR and MMC made a series of recommendations on other steps to break the cycle of abuse and increase protection along the journey. These recommendations included increasing access to legal aid for survivors of abuses, strengthening cross-border cooperation between law enforcement actors, and providing viable alternatives to these dangerous journeys by enhancing efforts to improve access to education and employment in the region.

Following evidence and recommendations in that report, in June 2021, UNHCR mapped the availability of selected protection services in key locations in Central, West, North Africa and in the East and Horn of Africa along routes heading to North Africa, notably to Libya and Egypt, as well as to Italy, Spain (including the Canary Islands) and Yemen8. It aimed to complement similar mapping undertaken in the North Africa region, such as the UNHCR MENA Community Protection Network map.

This updated 2022 mapping report continues to reveal that protection services for survivors of abuses along the route remain extremely limited in some key locations. For example, little is available in the way of safe shelters for victims of trafficking or survivors of other abuses in Sudan, with only two facilities in the whole country, which are both in Kassala in the east of the country. Similarly, specific support for access to justice for survivors of various forms of abuses is rarely available anywhere on the routes, while in several key mixed movement locations (such as in Dongola in northern Sudan, Ounianga-Kebit and Faya-Largeau in northern Chad, and in areas in Mali and Niger bordering Algeria or Libya), there are almost no protection services available to survivors of abuses. These locations are often the last stops before refugees and migrants embark on further dangerous journeys across the Sahara Desert. They present a critical opportunity for people, who may have already been subjected to abuses at the hands of state and/or non-state actors, to get help and to access protection instead of, and as an alternative to, moving onward to risk crossing the desert in the hands of unscrupulous human smugglers and traffickers. People expelled from some North African countries (Libya and Algeria) are abandoned in these locations, leaving them in vulnerable, and often life-threatening situations. Identification and profiling capacities and support for victims of trafficking are generally very limited in these remote areas and all along the routes.

The people undertaking these routes through Central, West, and North Africa and the East and Horn of Africa vary greatly in their profiles, reasons for moving, their intentions, vulnerabilities, and their needs for protection services. They include refugees, asylum-seekers, victims of trafficking, unaccompanied or separated children, and migrants fleeing poverty. Their protection profile may evolve during a journey where circumstances can change quickly for the worse and without warning, where people are rendered helpless. In this fluid and treacherous context, this mapping of services focuses on helping people on the move to access protection services based on their vulnerabilities and needs rather than on their status. We hope that this vulnerability and needs based approach will contribute to greater availability of services for all, as well as increased efforts for identification and referral. With this mapping, UNHCR aims to support increased referrals to protection services, including across borders, to highlight areas where further resources are needed to address gaps in existing (protection) services, and to increase refugees’ and migrants’ awareness and use of the support available along the routes. 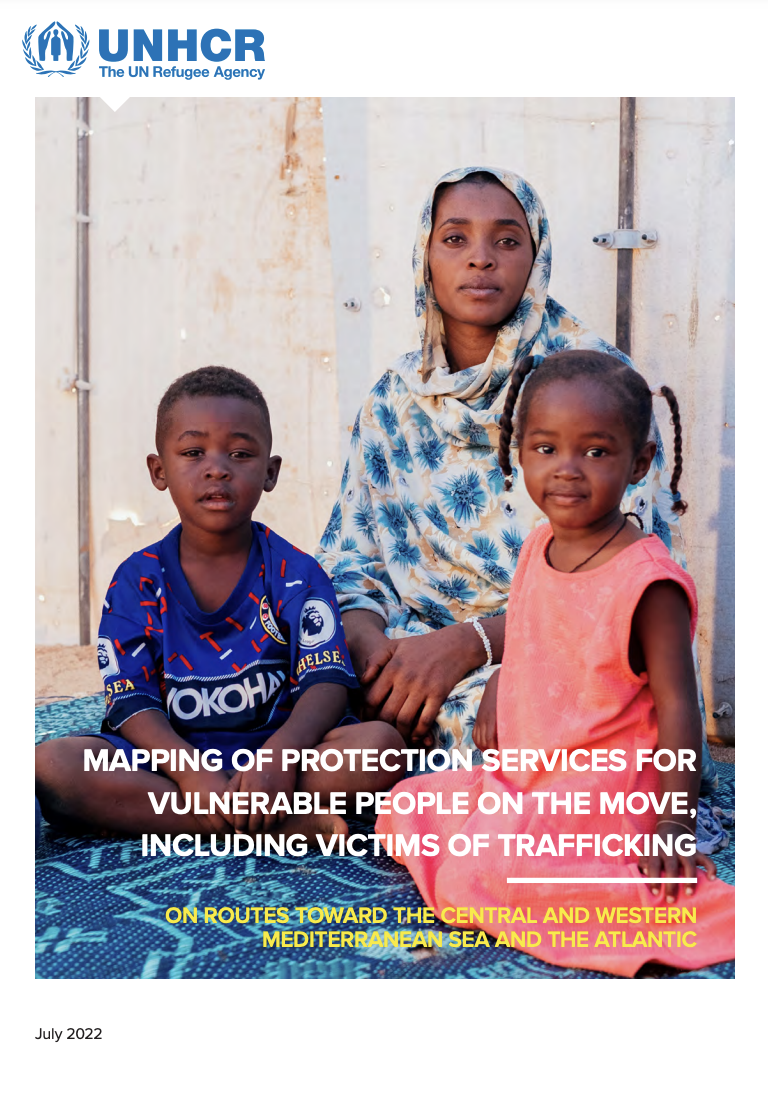 Mapping of Protection Services for Vulnerable People on the Move, Including Victims of Trafficking - On Routes Toward the Central and Western Mediterranean Sea and the Atlantic - United Nations High Commissioner for Refugees, 2022 DOWNLOAD

An at a glance document providing information about the services of the National Human Trafficking Hotline.

Global initiative to explore the sexual exploitation of boys