Back to all articles
Forced Labor — and human trafficking for forced labor — have been documented as recently as 2018 in the cocoa sector in Côte d’Ivoire, with one recent study by the Walk Free Foundation and Tulane University estimating the number of victims at approximately 2,000 children and nearly 10,000 adults. In late 2016, Verité completed a qualitative rapid appraisal study to understand the nature of the root causes of forced labor in the Ivoirian cocoa sector using an indicator-based approach grounded in methodological guidance from the International Labor Organization. Verité’s research found that some cocoa workers may be at risk of forced labor due to deception or other exploitation in the course of their recruitment, and may face debt bondage and other risks once at their workplaces on cocoa farms. Isolation, nonpayment or exploitative terms of payment, induced indebtedness, and other factors can potentially compound workers’ vulnerability to forced labor. Verité found that migrants (from Burkina Faso, Mali, and non-cocoa producing areas of Côte d’Ivoire) who are carrying debt related to their recruitment and migration, and who are relatively early in their employment tenure in the cocoa sector, are the workers most likely to be at risk for these issues. The findings from Verité’s research are published separately in the report Assessment of Forced Labor Risk in the Cocoa Sector of Côte d’Ivoire. With support from the International Cocoa Initiative, and in consultation with a range of industry, government, and civil society actors, Verité used these findings as the basis to develop the set of recommendations presented here. 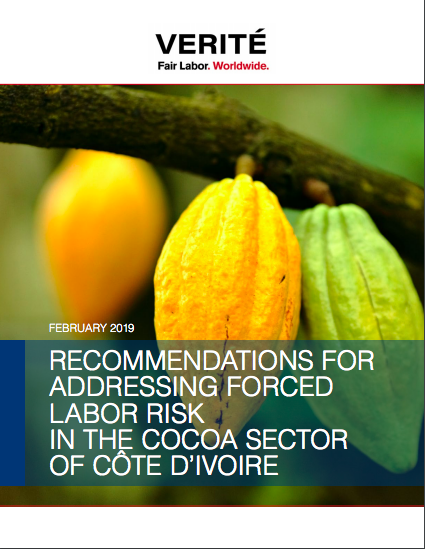 A statistically representative study by Tulane University and Walk Free Foundation in 2018 estimated that 0.42 percent of adults working in cocoa experienced forced labor in Côte d’Ivoire (CDI) between 2013 and 2017. The same study found that 0.17 percent...

COVID-19 Guidance for Investors and Financial Institutions on Job Protection

COVID-19 as an immediate cause of economic pressures is likely to be time limited. It is therefore important that adequate continuity planning is in place which allows businesses to recover quickly and effectively when demand recovers. Jobs, and the...Read More

Human Trafficking Victims, and Those Vulnerable to Trafficking, Need Increased Protections In Response to COVID-19 Pandemic

Human trafficking thrives in times of crisis and uncertainty, when the needs of the most vulnerable among us are often overlooked. Congress recently passed the $2 trillion coronavirus relief legislation, the Coronavirus Aid, Relief, and Economic Sec...Read More