The People’s Republic of China (PRC) government continues to carry out genocide and crimes against humanity against Uyghurs and members of other ethnic and religious minority groups in the Xinjiang Uyghur Autonomous Region (Xinjiang), China The PRC’s crimes against humanity include imprisonment, torture, rape, forced sterilization, and persecution, including through forced labor and the imposition of draconian restrictions on freedom of religion or belief, freedom of expression, and freedom of movement. Businesses, individuals, and other persons, including but not limited to investors, consultants, labor brokers, academic institutions, and research service providers (hereafter “businesses and individuals”) with potential exposure to or connection with operations, supply chains, or laborers from the Xinjiang-region, should be aware of the significant reputational, economic, and legal risks of involvement with entities or individuals in or linked to Xinjiang that engage in human rights abuses, including but not limited to forced labor and intrusive surveillance.  Given the severity and extent of these abuses, including widespread, state-sponsored forced labor and intrusive surveillance taking place amid ongoing genocide and crimes against humanity in Xinjiang, businesses and individuals that do not exit supply chains, ventures, and/or investments connected to Xinjiang could run a high risk of violating U.S. law. Potential legal risks include violation of statutes criminalizing forced labor including knowingly benefitting from participation in a venture, while knowing or in reckless disregard of the fact that the venture has engaged in forced labor; sanctions violations if dealing with designated persons; export control violations; and violation of the prohibition of importations of goods produced in whole or in part with forced labor or convict labor. 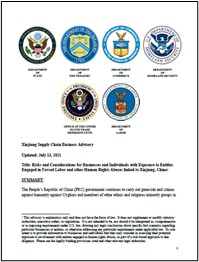 Risks and Considerations for Businesses and Individuals with Exposure to Entities Engaged in Forced Labor and other Human Rights Abuses linked to Xinjiang, China, 2021 DOWNLOAD

The Philippine Sex Workers Collective: Struggling to be Heard, not Saved

The Philippine Sex Workers Collective is an organisation of current and former sex workers who reject the criminalisation of sex work and the dominant portrayal of sex workers as victims. Based on interviews with leaders of the Collective and fifty...Read More

A Human Rights Primer for Business: Understanding Risks to Construction Workers in the Middle East

Employment in the construction industry is characterised by low wages and precarious working conditions, with aspects of the business model contributing to widespread violations of workers’ labour rights. These include: a narrowmargin, least-cost ...Read More

For years, Centro de los Derechos del Migrante, Inc. (CDM) has documented fraudulent recruitment schemes that funnel hundreds of thousands of U.S. dollars per year into the pockets of fraudulent recruiters. This type of fraud is widespread, harming...Read More

2020 was a year unlike any other. This report documents what happened to garment workers across Asia – in Sri Lanka, Pakistan, India, Indonesia, Cambodia and Bangladesh, putting numbers to the 25 per cent or so wage losses suffered by these worker...Read More