From the late 1970’s, China’s economy has enjoyed 30 years of explosive growth. With its 1.4 billion inhabitants, it is now the world’s largest economy. This economic miracle, now on everyone’s lips, has lifted hundreds of millions of Chinese out of poverty and made China a key player in globalization.

A middle class, consuming goods and services, and confident in its potential for enrichment has emerged. But this economic transition has a dark side: it is taking place at the expense of a significant part of the Chinese population. Migrant workers, known as nongmingong, come from poor agricultural regions in the country. Estimated at nearly 290 million, migrant workers toil in the manufacturing industry that make China the world’s factory: electronics, textiles, toys, etc. Organized according to the registration system called hukou, these workers remain migrants throughout their lives within their own country.

For larger cities in Guangdong Province where a substantial number of factories are located, it is almost impossible for rural residents to change their hukou due to strict regulations put in place. The consequences are serious: this new proletariat face unequal access to basic services provided to other citizens, such as education of children and healthcare. A third of the migrants are woman. With a country shifting from being the global workbench in the last few decades to a more service-oriented economy, this marginalized group remains for a big part working in the manufacturing industry such as the toy industry.

In 2018, approximately 30% of migrant workers were employed in the manufacturing industry, compared to around 50% in the service industry. The Chinese government has enacted labour laws which are comprehensive, albeit the lack of freedom of association. Workers have the right to be paid in full and on time, a formal employment contract, a 40- hour working week with fixed overtime rates, social insurance and severance pay in the event of contract termination. Additionally, equal pay for equal work and protection against workplace discrimination are included in labour laws.

There are several laws that protect the rights of women, and which also mention that employers are to prohibit sexual harassment against women. However, the implementation of these labour laws are poor, especially in factories where migrant workers are working. Rights violations in Chinese factories have been well documented by human rights activists, investigative journalists and labour NGOs. China Labour Watch has conducted repeated investigations into toy factories, revealing a multitude of serious violations of labour laws. These violations range from excessive overtime hours to. 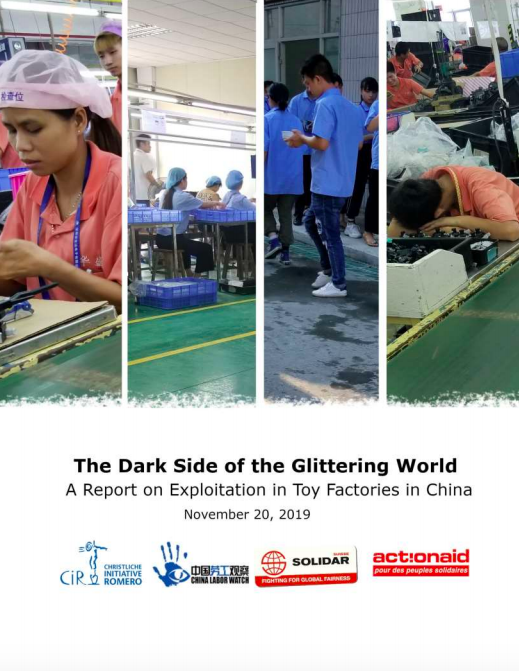 The Dark Side of the Glittering World A report on exploitation in Toy Factories in China - China Labour Watch, 2020 DOWNLOAD

Since its establishment in 2007, the Working Group on Child Trafficking as a sub-group of the Task Force on Combating Human Trafficking has been working to gather background information on the phenomenon of child trafficking in Austria through the e...Read More

According to the International Labour Organization (ILO), an estimated 21 million people are victims of forced labor around the world. As defined by the ILO, forced labor refers to “situations in which persons are coerced to work through the use o...Read More

Edited by Joel Quirk and Julia O’Connell Davidson. This is the first volume of the series Beyond Trafficking and Slavery Short Course. Much of what people think they know about human trafficking and ‘modern-day slavery’ is inaccurate, ...Read More

Freedom of movement for persons identified as victims of human trafficking: An analysis of law, policy and practice in the ASEAN Region

Author: Marika McAdam Sheltering victims of trafficking require a complex balance to be achieved between the rights of victims (including to freedom of movement and liberty), and the sometimes competing interests of other stakeholders. This Study...Read More