Issara Institute recognizes worker voice as conveying the voices, experiences, and needs of workers, and channeling that voice into clear mechanisms committed to remediation and a rebalancing of power asymmetries between employers and workers. This definition is consistent with that established at the start of the organized labour movement in the late 1800s, and is not to be confused with worker feedback tools, which do not necessarily have clear mechanisms or commitments to addressing power asymmetries or remediation (and which in many cases only serve to support corporate due diligence). As a non-profit organization, Issara Institute operates a range of worker voice channels aimed at supporting jobseekers in Cambodia and Myanmar, and migrant workers in Thailand and Malaysia. These channels are run in Burmese, Khmer, Nepalese, and Thai languages, including several ethnic dialects of Myanmar including Kachin, Kayin, Mon, and Shan. The multiple channels to engage directly with workers are comprised of a free, 24-hour helpline, social media platforms and messaging (Facebook, Line, and Viber), the Issara Golden Dreams smartphone application, and direct in-person outreach and empowerment activities. The primary remediation channel used by Issara Institute is with and through business—partnership with global brands and retailers, to drive remediation and improvements in the labour practices of their supplier base and associated recruitment agencies. Issara Institute also refers cases to government departments of the origin and destination countries, and to trade union and civil society partners—in addition to working with these stakeholders on broader systems change. 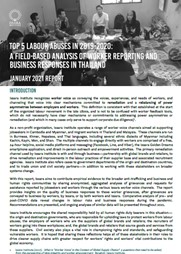 The Landscape of Sexual Exploitation of Children in South Africa

Consolidated Learnings from Research on Overseas Labor Recruitment in Vietnam

This briefing document synthesizes the key themes emerging from GFEMS-funded research and advocacy efforts focused on Vietnamese labor migration between 2018-2020. Findings represent inputs from a range of labor migration stakeholders including gove...Read More