The U.S. Executive Order 13126 on the “Prohibition of Acquisition of Products Produced by Forced or Indentured Child Labour,” was signed on June 12, 1999. The Executive Order is intended to ensure that U.S. federal agencies do not procure goods made by forced or indentured child labour.

It requires the Department of Labor, in consultation with the Departments of State and Homeland Security, to publish and maintain a list of products, by country of origin, which the three Departments have a reasonable basis to believe might have been mined, produced, or manufactured by forced or indentured child labour.

Under the procurement regulations implementing the Executive Order, federal contractors who supply products on a list published by the Department of Labor must certify that they have made a good faith effort to determine whether forced or indentured child labour was used to produce the items listed. 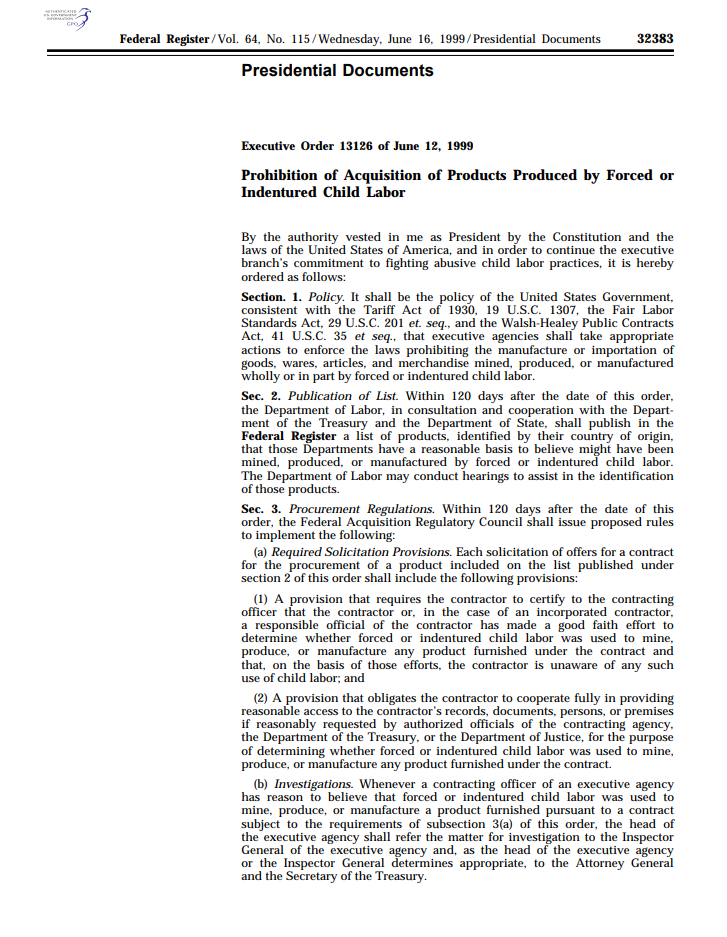 Sri Lanka’s recruitment industry plays a pivotal role in its labour migration sector. While the industry is expected to secure jobs for Sri Lankans within conditions of safety, security and dignity, the regulation of the industry is important to e...Read More

The Impact of Covid-19 on Modern Slavery and Child labour: How can lawyers make a difference? – International Bar Association

According to the 2017 Global Estimates of Modern Slavery published by Alliance 8.7, 40.3 million people were estimated to be victim of modern slavery in 2016. Modern slavery is not defined in law and it is used as an umbrella term to refer to ‘sit...Read More

This Law defines legal and organisational grounds for preventing and combating human trafficking, powers and obligations of state bodies, officials and legal persons in taking measures against human trafficking, and the procedures for coordination o...Read More

This Act requires entities based, or operating, in Australia, which have an annual consolidated revenue of more than $100 million, to report annually on the risks of modern slavery in their operations and supply chains, and actions to address those ...Read More