2009 List of Goods Produced by Child Labor or Forced Labor

Abstract
On September 10, 2009, the Department of Labor released its initial “list of goods from countries” (List), pursuant to Section 105(b)(2)(C) of the TVPRA of 2005. The List was released as part of a larger report detailing the methodology, scope, and limitations of the underlying research. Included in the List were 122 goods from 58 countries that ILAB has reason to believe are produced by forced labour, child labour or both, in violation of international standards. The countries on the List span every region of the world. The most common agricultural goods listed are cotton, sugarcane, tobacco, coffee, rice, and cocoa. In the manufacturing sector, bricks, garments, carpets, and footwear appear most frequently; and in mined or quarried goods, gold and coal. The report also includes listings of the sources used to make determinations about each good on the List. The primary purpose of the List is to raise public awareness about the incidence of child labour and forced labour in the production of goods in the countries listed, and, in turn, to promote efforts to eliminate such practices. 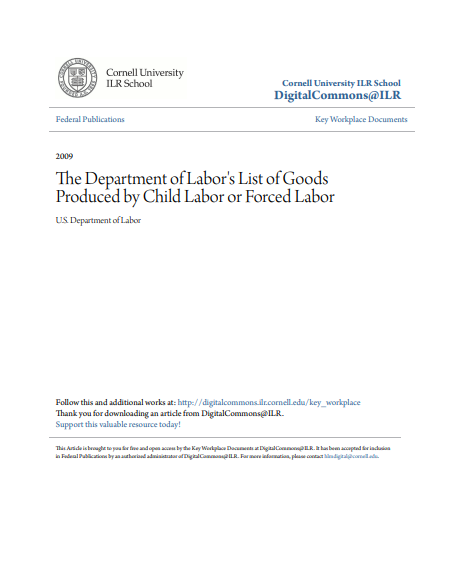 2016 List of Goods Produced by Child Labor or Forced Labor

This is the seventh edition of the List of Goods Produced by Child Labor or Forced Labor, mandated by the Trafficking Victims Protection Reauthorization Act (TVPRA) of 2005 (TVPRA List). The list has a total of 139 goods produced by...

Technical Convening: Methodologies for Measuring the Prevalence of Modern Slavery

The Action plan aims to give ideas and examples for developing victim-centred and trauma-informed criminal justice systems. The Action plan compiles concepts from research, reports, and past projects as well as examples of models and ways of working...Read More