A Modern Response to Modern Slavery

The Centre for Social Justice, 2015

The UK has passed a Modern Slavery Act, the first of its kind in Europe but hopefully not the last. With the UK becoming a hostile environment for slave traders, it is possible that criminals will move their victims to a country without a Modern Slavery Act. To stop innocent men, women and children being forced into unimaginable situations, often malnourished and kept in squalor, every country in Europe needs to play its part. The same applies to the rest of the world; making one country or continent tougher on traffickers just moves the problem to a less hostile jurisdiction.

This report has found that a huge amount of modern slavery in Europe is driven by Organised Crime Groups (OCGs) who profit from the exploitation of vulnerable people. These highly sophisticated illegal businesses show a detailed understanding of how to avoid detection and prosecution by Europe’s law enforcement agencies. The kind of modern slavery that is driven by OCGs involves men, women and children being moved across international and national borders through various means of transportation and deception. Criminals will exploit victims in the most profitable of ways and by the easiest of means.

Exploiting the internet and borders made less defined due to European Union policies like Free Movement, OCGs find the trafficking of victims to be a highly lucrative and accessible crime to pursue. As such, they have become highly sophisticated in developing illegal business models.

When slavery was prevalent over two hundred years ago, there was no internet. Nor were many slave traders able to purchase low-cost international travel. So slavery as we know it today is modern. It thrives on modern technology and modern forms of travel. Trafficking a victim for exploitation, robbing that individual of their liberty and exerting violence and controlling through fear is slavery; just as cruel and unacceptable as it was all those years ago.

Slavery is also illegal in the modern world and as such, it is for law enforcement to prosecute any criminal involved in the slave trade. One of the first recommendations of this report is to harmonise terminology across Europe and the world. The rest of Europe should in the future refer to this form of crime as what it is: modern slavery. Many of the European police interviewed for this report agreed. They commented that using the term modern slavery made raising public awareness of the issue much easier and drove home the severity of the problem.

Of equal importance is obtaining reliable data from which meaningful policy and resource decisions can be made. There is a lack of data and statistics. It is currently impossible to say how many victims of modern slavery exist in any one country. The UK has developed a new methodology to reach a more reliable estimate, but to solve the problem academics, think tanks, governments and law enforcement across Europe need to concentrate on how to develop good quality data.

Modern slavery thrives on extreme poverty and disadvantage which is why the Centre for Social Justice will continue to campaign to keep it a high profile issue. Making modern slavery a thing of the past will require a fight against organised crime, but we must also fight the poverty that makes a man, woman or child vulnerable to exploitation in the first instance.

This report looks at how policy makers and law enforcement across the European Union could develop a more modern response to modern slavery. 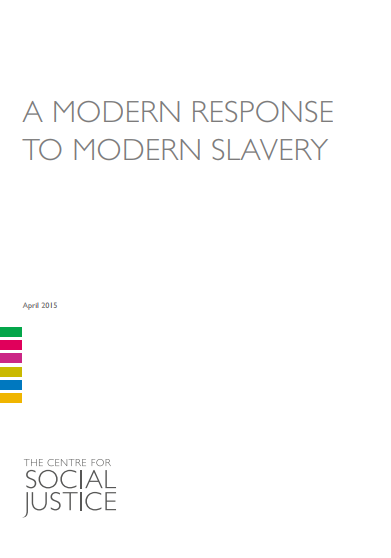 A Modern Response to Modern Slavery - The Centre for Social Justice, 2015 DOWNLOAD

Modern Slavery: A Resource Guide for The Banking Industry

Every four seconds, someone is sold into modern slavery somewhere in the world. Every 60 seconds, the criminal industry that supports modern slavery makes more than US$285,000. These statistics, calculated from estimates by the International Labor O...Read More