This report presents the findings of research conducted by Focus on Labour Exploitation (FLEX) and Fife Migrants Forum (FMF) between March 2020 and February 2021. This research was initiated in order to seek to understand the risk of human trafficking for forced labour for people coming to Scotland on the Seasonal Workers Pilot (SWP) in the horticultural sector. A two-year SWP was announced by the UK government in 2018 in response to concerns raised by farmers about possible labour shortages in advance of and after the UK had left the European Union (EU). During the development and launch of the SWP the UK government did not engage in meaningful discussion with worker representatives on the scheme, despite serious concerns raised by experts on human trafficking and modern slavery. This report responds directly to these concerns, seeking to document the voices and experiences of the people who have come to Scotland on the SWP. In so doing it seeks to develop strategies that can be taken by the UK and Scottish governments to tackle the risks of human trafficking for forced labour on the SWP and to protect current and future workers.

The introduction of the SWP involved establishing a new Tier 5 sponsored visa, the Seasonal Workers Visa (SWV) and appointing two licensed scheme operators (Pilot Operators) as visa sponsors. The scheme was launched in April 2019 with an annual quota of 2,500 workers. This quota was increased to 10,000 in 2020; the SWP was extended for a further year and expanded to 30,000 workers in 2021. The SWP builds on learning from its predecessor, the Seasonal Agricultural Workers Scheme (SAWS), yet has a reduced number of scheme operators, and unlike SAWS, Pilot Operators are not permitted to source labour for their own needs. Despite its 71-year period of operation there is no independent evidence of worker experiences on SAWS. This research addresses this lack of data and foregrounds the impact of the SWP on workers.

Temporary and tied migration programmes such as the SWP have a range of risks associated with their short-term nature and the limited rights afforded to workers participating in them. In addition, horticulture is a high-risk labour sector due to factors including: the nature of its product and labour supply chain, isolated workplaces and a large migrant workforce. In order to assess the risks of human trafficking for forced labour for workers on the SWV, quantitative and qualitative data was collected on the experiences of seasonal horticultural workers in Scotland. This data collection took place during the ongoing COVID-19 pandemic and so this report also documents the impact of the pandemic on workers. A framework for analysis based on the International Labour Organization (ILO) indicators of forced labour in adults was used to interpret the data. 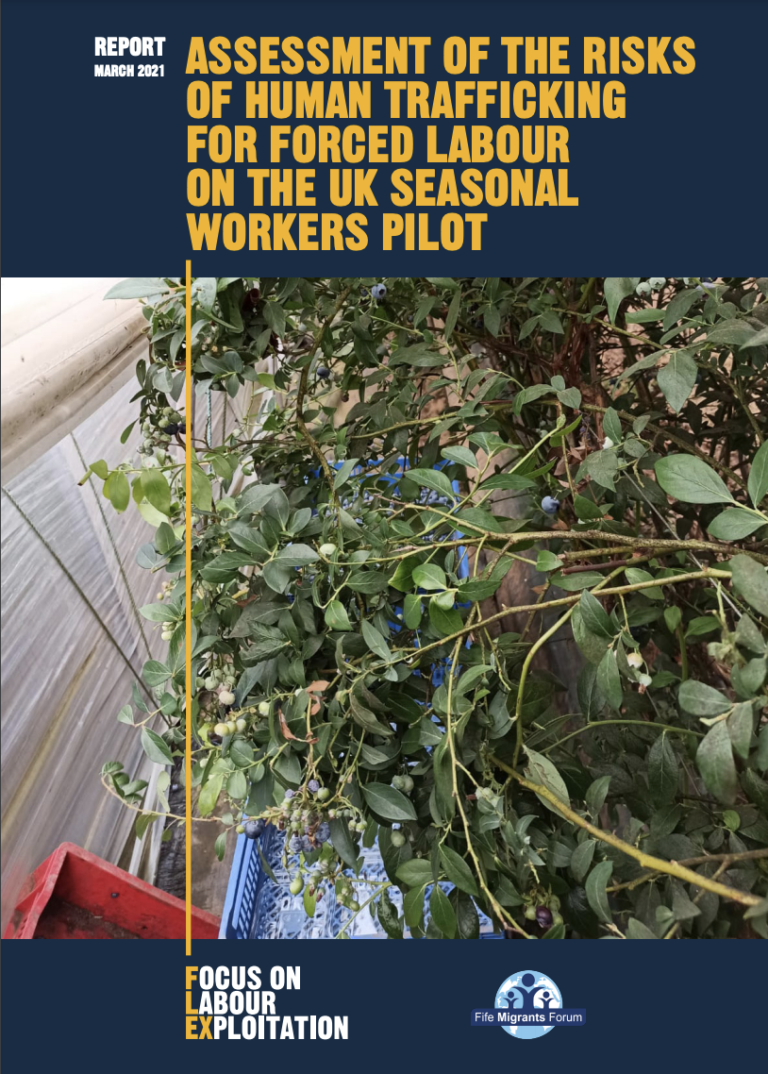 Assessment of the Risks of Human Trafficking for Forced Labour on the UK Seasonal Workers Pilot - Focus on Labour Exploitation and Fife Migrants Forum - March, 2021 DOWNLOAD

Report of the Special Rapporteur on the Human Rights of Migrants, Felipe González Morales

The present report outlines the main activities undertaken by the Special Rapporteur on the human rights of migrants, Felipe González Morales, during the reporting period since his most recent report to the General Assembly. In the report, the ...Read More

In late 2017, the Office of the UN High Commissioner for Human Rights (OHCHR) began receiving increasing allegations by various civil society groups that members of the Uyghur and other predominantly Muslim ethnic minority communities were missing o...Read More

This brief has been prepared by Phil Marshall, Technical Consultant to the Issara Institute. This paper summarizes the current discussion around fee-free recruitment, including: (1) definitions of fee-free recruitment; (2) linkages between migra...Read More

The U.S. Department of State released its 2021 Trafficking in Persons (TIP) Report – the 21st installment of this annual publication. As required by the Trafficking Victims Protection Act, the TIP Report assesses government efforts around the wo...Read More