Sex tourism is the travel by buyers of sexual services for the purpose of procuring sexual services from another person in exchange for money and/or goods. Sex tourism can occur between countries or cities. Sex tourists create a demand which drives the recruitment of more victims to be trafficked to commercial sex markets to meet their demands. Human trafficking, including sex trafficking, is defined in Article 3 of the United Nations Protocol as “the recruitment, transportation, transfer, harbouring or receipt of persons, by means of the threat or use of force or other forms of coercion, of abduction, of fraud, of deception, of the abuse of power or of a position of vulnerability or of the giving or receiving of payments or benefits to achieve the consent of a person having control over another person, for the purpose of exploitation…; (b) The consent of a victim of trafficking in persons to the intended exploitation set forth in subparagraph (a) of this article shall be irrelevant where any of the means set forth in subparagraph (a) have been used.” The Trafficking Victims Protection Act 2000 (TVPA) sec. 103(9) defines sex trafficking as “the recruitment, harboring, transportation, provision, or obtaining of a person for the purpose of a commercial sex act” and explains that all ‘‘severe forms of trafficking in persons’’ means—(A) sex trafficking in which a commercial sex act is induced by force, fraud, or coercion.” Both provide that the inducement of a child less than 18 years of age eliminates the need to prove force, fraud or coercion. Sex trafficking is the response to demand in the market; it is the supply of persons, especially women and children, who are brought into sexual slavery and exploitation. Shared Hope International (SHI), with funding from the Office to Monitor and Combat Trafficking in Persons, U.S. Department of State, undertook a twelve-month examination of the marketplace of commercial sexual exploitation—defined in this report as the buying and selling of humans for the purposes of sexual exploitation in exchange for anything of value—in four countries: Jamaica, Japan, the Netherlands, and the United States. Each of these countries has major markets of commercial sexual services, and each country is a destination for sex tourists from abroad and internally. Moreover, each country has a distinctly different culture, economy, political system, and history of prostitution and slavery which presented comparative examinations of the operation of sex tourism and trafficking markets. Field researchers travelled to each country and worked closely with local specialists to gain access to many venues and actors in the commercial sex markets in order to understand the impact of demand for commercial sex on sex tourism and sex trafficking.

This report approaches sex tourism and sex trafficking from a market-based perspective in which buyers of commercial sex services bring demand, traffickers move victims like product to the markets to satisfy the demand, and facilitators allow the trade to occur in a myriad of ways, for example by providing a venue for the transactions, similar to a shopping mall of human product. 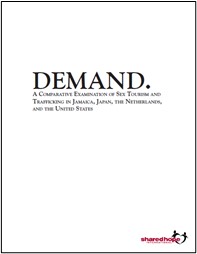 DEMAND. A Comparative Examination of Sex Tourism and Trafficking in Jamaica, Japan, the Netherlands, and the United States DOWNLOAD

The following information is based on incoming communication with the National Human Trafficking Hotline from January 1, 2016 – December 31, 2016 about human trafficking cases and issues related to human trafficking in Puerto Rico.  ...Read More

The purpose of this position paper is to inform the development of an effective labour market enforcement strategy for tackling sexual harassment in the context of low-paid and insecure work. It seeks to nuance the discussion around se...Read More