In 2015, the UK Government introduced the Modern Slavery Act (MSA), which requires certain companies publish an annual statement detailing what steps they have taken to tackle modern slavery, both in their operations and in their supply chains. Business & Human Rights Resource Centre (BHRRC) has tracked companies’ reporting every year since, and our findings show that the MSA has failed to deliver the transformational change many hoped for.

Three years on, most companies still publish generic statements committing to fight modern slavery, without explaining how. Sadly, only a handful of leading companies have demonstrated a genuine effort in their reporting to identify vulnerable workers and mitigate modern slavery risks.

This report is BHRRC‘s third annual assessment of transparency statements by the FTSE 100 under the MSA. As in their previous assessments, the action reported by companies varied greatly, with only a small cluster of leaders standing out, such as Marks & Spencer, Diageo, Morrisons, and Sainsbury’s. 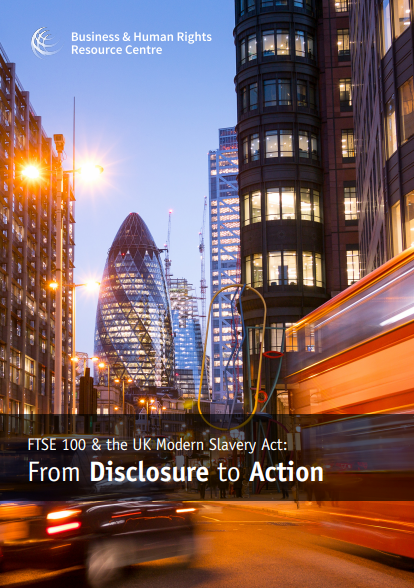 This Memorandum of Understanding (MoU) aims at creating a cooperation between IndustriALL Global Union and ACT (Action Collaboration Transformation) corporate signatories (“We”) in order to achieve living wages for workers in the global textile a...Read More

Land But No Freedom: Debt, poverty and human suffering in the Philippine banana trade

This case study is one of a series of case studies to supplement the global campaign report, Ripe for Change, drawing attention to the plight of specific groups of small-scale farmers or workers in international food value chains and/or promoting su...Read More

Monitoring the Monitors: A Critique of PriceWaterhouseCoopers (PwC) Labour Monitoring

This report presents an assessment of the world’s largest private monitor of labour and environmental practices – PricewaterhouseCoopers (PwC). PwC performed over 6,000 factory audits in 1999, including monitoring for Nike, Disney, Walmart, the ...Read More