The UK-wide Modern Slavery Helpline and Resource Centre was established in October 2016 to provide victims, the public, statutory agencies and businesses with access to information and support on a 24/7 basis.

Operated by Unseen, in its first full year of operations, the Helpline received 3,710 calls which indicated a total of 4,886 potential victims in situations of modern slavery from 94 different nationalities. The Helpline also received 710 webforms through its online reporting service. A total of 1,271 modern slavery cases were indicated during 2017.

Calls are received from members of the public wanting to report a suspicious situation, frontline workers seeking guidance and advice on modern slavery, businesses wanting information about transparency and potential forced labour situations and potential victims wanting help and advice about their situation.

The Helpline receives around 10% of its calls related to modern slavery from potential victims themselves. A further 44% of calls come from someone in direct contact with a potential victim.

Many different situations and types of exploitation have been reported to the Helpline highlighting the diverse nature and scale of modern slavery in the UK. During 2017, the Helpline calls indicated a total of 3,540 potential victims of labour exploitation/forced labour from a range of sectors and industries including car washes, construction, nail bars, hospitality, agriculture and manufacturing.

Andrew Wallis, CEO of Unseen, said “It has been a landmark year for Unseen and one that has clearly highlighted the need for a national helpline that can genuinely deal with all aspects of modern slavery in a professional, caring and knowledgeable manner. Our actions are directly supporting people out of exploitation and we must continue to provide a service that puts the victim at the heart of what we do.”

Justine Currell, Executive Director of Unseen, said “The Helpline is a vital tool in the UK’s fight against modern slavery and the number of calls we have received in our first year is testament to that. Our work with partners means that we are getting the message out to the public and potential victims about the help and support they can access through the Helpline. It is absolutely vital that potential victims and others have a service that is available 24/7 and is confidential and free.”

In 2017, the Helpline made a total of 1,442 referrals to other agencies and organisations demonstrating Unseen’s commitment to sharing information with those who can prevent modern slavery crimes and protect vulnerable individuals. These referrals were made to every police force in the UK, the National Crime Agency, a range of NGOs and the Gangmasters & Labour Abuse Authority.

UK Modern Slavery Helpline: 08000 121700
or via the website at https://www.modernslaveryhelpline.org/ 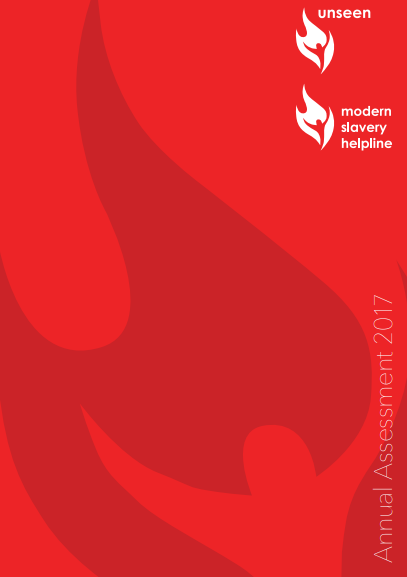 The report gives an overview of the situation of children workers in Myanmar in the domestic work sector.

How Companies can deal with Labour Exploitation in the Agricultural Sector

Abstract This short paper tends to shed light and reflect on the way forward for companies to address labour exploitation in their agricultural supply chain. For that, it will first refer to some of the cases reported in Spain and Italy to then br...Read More