Abstract
Human trafficking and modern slavery are routinely framed as key threats facing society. Despite increased media, policy, and practitioner attention the evidence base remains underdeveloped. The numerous knowledge gaps include a lack of empirical studies and research into labour trafficking. Since labour trafficking is a complex and varied phenomenon, the authors chose to explore one subset of it in a systematic, detailed, and empirical fashion. Their focus was exploitation in the casual construction industry in the UK perpetrated by Irish Traveller offending groups. The authors used hard-to-reach data from three major police investigations, namely operational case files and interviews with senior investigating officers. Taking a qualitative approach, they disentangled behaviours and dynamics across three major stages in the trafficking process: recruitment, control, and exploitation. The authors identified key challenges associated with investigating this crime. In discussing the study’s implications for research, policy, and practice, the authors also include officers’ recommendations for future cases. 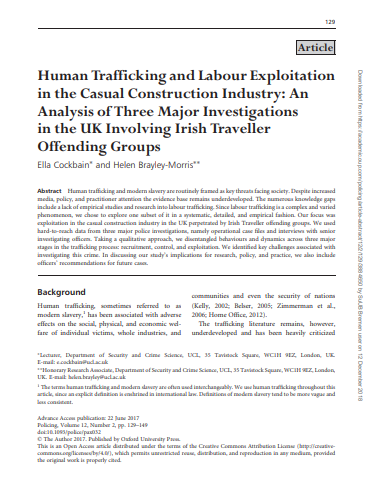 “To help workers, I would tell the Government to…” Participatory Research with Workers in the UK Hospitality Sector

This report is the second of three working papers exploring the experiences and drivers of labour abuse and exploitation in three understudied low-paid sectors of the economy: cleaning, hospitality and the app-based courier sector. It highlights k...Read More

Corruption is an underlying cause of and a facilitating tool for practices arising from contemporary forms of slavery; it is essential to creating the conditions for a low-cost, low-risk, high-profit illicit trade in vulnerable individuals. Yet, cor...Read More