An increasingly interconnected world has led to sprawling supply chains across the globe. But what is the human cost of increasing consumer demands for fresh produce year-round, fast fashion, and flashy gadgets? For those held in forced labor in supply chains, what remedies exist? What can advocates do to hold corporations accountable for human trafficking and forced labor in their supply chains? As one of the world’s largest importing economies, it is estimated that the United States imports up to $144 billion worth of goods made using forced labor. A few of the most imported at-risk goods include electronics, apparel, cocoa, seafood, timber, and cotton. This guide provides advocates with tools to leverage U.S. trade enforcement mechanisms, specifically the prohibition on imports made using forced labor, to clean up corporate supply chains. This guide is for anyone – U.S. and foreign NGOs, lawyers, labor unions, and individuals – interested in using U.S. trade law and policy to combat forced labor in their countries. 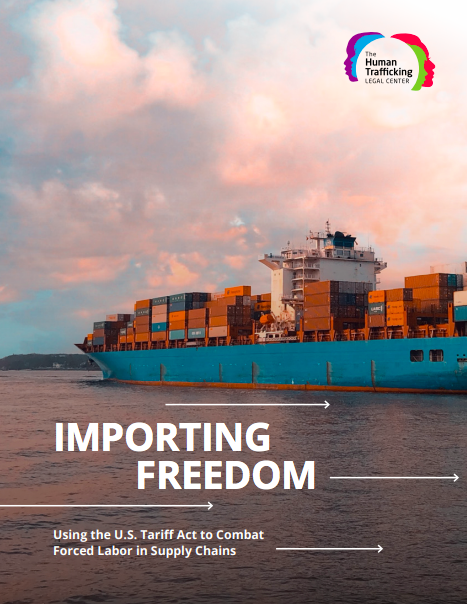 Does Human Trafficking Exist in Your Community?: Examining Reports and Reviewing Facts

A reference tool to assist community actors in finding reliable sources of data about human trafficking incidents in their area.

COVID-19 is a test of societies, of governments, of communities and of individuals. It is a time for solidarity and cooperation to tackle the virus, and to mitigate the effects, often unintended, of measures designed to halt the spread of COVID-19. ...Read More

This report depicts The Passage Anti-Slavery Project’s first two years, from June 2018 to June 2020. The first section of the report describes the project’s objectives, the steering group which guided the project and its main key achievement...Read More

COVID-19 Impact on Trafficking in Persons

Trafficking in Persons (TiP) is a core protection issue violating the dignity and integrity of the person, endangering their life and physical security. It is a serious crime and a grave violation of human rights. In normal times, TiP is widespread,...Read More