Legislative guide: For the Protocol to prevent, suppress and punish trafficking in persons, especially women and children 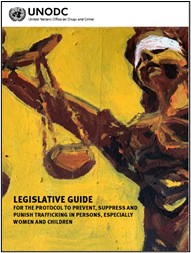 LEGISLATIVE GUIDE: FOR THE PROTOCOL TO PREVENT, SUPPRESS AND PUNISH TRAFFICKING IN PERSONS, ESPECIALLY WOMEN AND CHILDREN, 2020 DOWNLOAD

Sexual abuse can be difficult to think about and to talk about: it can feel complex, emotional and even scary. You might worry about ‘getting it wrong’, having to have difficult conversations, ‘opening a can of worms’, and not know...Read More

The U.S. Executive Order 13126 on the "Prohibition of Acquisition of Products Produced by Forced or Indentured Child Labour," was signed on June 12, 1999. The Executive Order is intended to ensure that U.S. federal agencies do not procure goods mad...Read More

The purpose of this blueprint is to provide practical support to: (a) CSR/Sustainability managers in driving the effort of embedding human rights across the organisation and (b) Human Resource, Purchasing and Risk/Legal managers in clarifying their...Read More