‘The term “stateless person” means a person who is not considered as a national by any State under the operation of its law’. Clearly stated in Article 1 of the 1954 Convention Relating to the Status of Stateless Persons by the United Nations, this statement indicates the exceptional status of stateless people who do not belong and are not being protected by any State government. The status of the stateless is different from any other status and identity in nature; a stateless person is not recognised as a citizen and, as a result, is much more vulnerable to rights violations than normal citizens.

According to the United Nations High Commissioner for Refugees (UNHCR)’s calculation, 4.2 million people worldwide are confirmed to be stateless, as of 2020. The exact figure is unknown due to gaps in data collection and is believed to be much higher than what has been reported.

The four main causes of statelessness are:

Gaps in national laws regarding nationality

Children being born in countries that do not grant birthright citizenship

The emergence of new countries or changes in borders

People losing or being deprived of nationality due to specific reasons, such as living away from their home countries for too long

The causes of statelessness vary and include the dissolution of a State, the political transfer of territory, conflicts, and being born by stateless parents. Take Myanmar as an example, the discriminatory citizenship laws have removed the citizenship of many Rohingya, making them one of the predominant stateless communities in the world. As for Kuwait, many people failed to retain their citizenship during the nation’s political transformation into an independent state. There was also an increasing number of citizens being stripped of their citizenship during the 2011 Arab Spring.

The predicament of statelessness in Asia, such as stateless Rohingya refugees in Myanmar and Thailand having one of the world’s largest populations of stateless people, has been widely discussed in recent years. Taiwan is another Asian country with a long-standing existence of statelessness, which is intertwined with another difficult social issue – that of undocumented migrant workers. 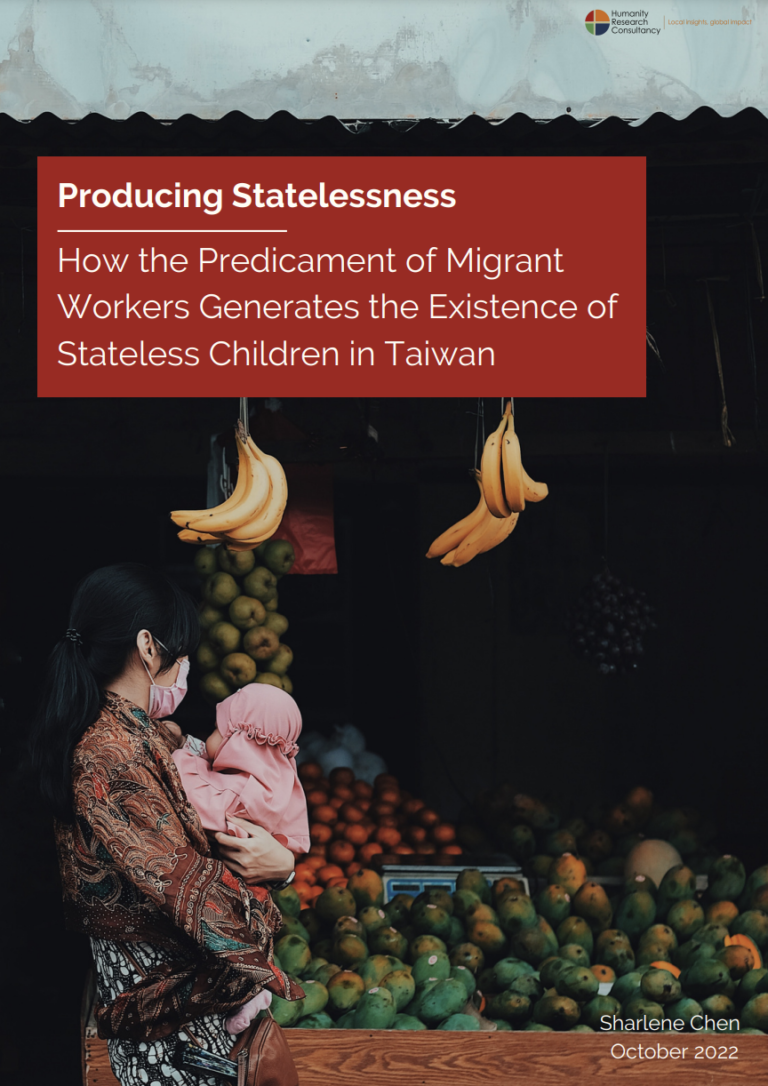 Producing Statelessness How the Predicament of Migrant Workers Generates the Existence of Stateless Children in Taiwan - Humanity Research Consultancy, 2022 DOWNLOAD

Reflecting on the year that was: Lessons from the covid frontlines

Covid-19 has had a devastating impact on those most vulnerable to forced labour and human trafficking. Around the world, communities already suffering from poverty and exploitation have borne the brunt of the pandemic and its economic fallout. Th...Read More

TAGS: AfricaAsiaLatin America and the Caribbean

The UK Modern Slavery Act came into force in 2015. The insight gives an overview of the Act, focusing on the impact on supply chains and the role of procurement and actions required to support the organizations. The document also makes reference to o...Read More

Congressional Hearing: The Role of Technology in Countering Trafficking in Persons

Hannah Darnton, representing Tech Against Trafficking, is participating in a Congressional Hearing on ‘The Role of Technology in Countering Trafficking in Persons‘: Date: Tuesday, July 28, 2020 – 10:00am Location: Online via videoconferencing Subcommittees: Subcommittee on Research and Technology (116th...