Real Care is Rare: An on-the-Ground Perspective on Blood Diamonds and the Fifth 'C'

A new report, Real Care is Rare. An On-The-Ground Perspective on Blood Diamonds and the Fifth ‘C’, highlights the existence of modern day blood diamonds due to ongoing ties between diamonds and brutal human rights abuse (amongst other ethics issues) in certain diamond mining locales on the African continent and beyond.

The report, issued by the Kimberley Process Civil Society Coalition, points out that the Kimberley Process only intervenes where rough diamonds are exploited by rebels to fight governments. This leaves diamonds tainted by other types of violence or conflict to flow onto the global market certified ‘conflict free’. “Many people have been aware of this problem for years but the KP is still dragging its feet on expanding its scope to deal with these problems,” said KP Civil Society Coalition spokesperson, Shamiso Mtisi.

The cases spotlighted in the report include a failure to intervene where armed groups are exploiting diamonds without fighting governments; illegal military involvement in the diamond trade; and the perpetration of torture and killings against artisanal miners to clear diamond fields or secure industrial concessions – acts that continue to this day. It also spotlights issues of serious environmental harm from industrial mining.

The report voices rising concerns that commercial dynamics in the diamond sector ensure the continuation of such abuses despite industry schemes to prevent them, by creating a secondary market for cheaper unethical diamonds. The KP Civil Society Coalition points out that, whilst some states may see hindering Kimberley Process reform as protecting their commercial interests, many seasoned industry actors understand the reputational risks to the entire diamond sector if the KP fails to modernize. Market research highlights a new generation of consumers more socially conscious than ever. For these buyers, the continuation of serious abuse where a forum like the KP claims to unite stakeholders to help protect communities starts to raise credibility issues not just for the KP but for the diamond sector as a whole.

The report highlights that this new wave of conscientious consumer continues to find testimonial and photographic evidence depicting the grim realities of diamond related abuse publicly circulating. It highlights the serious implications of this for diamond branding and that this threat can only truly be addressed through international cooperation. The need for more targeted KP interventions to make this practically workable without causing undue harm to other diamond dependents is emphasised. 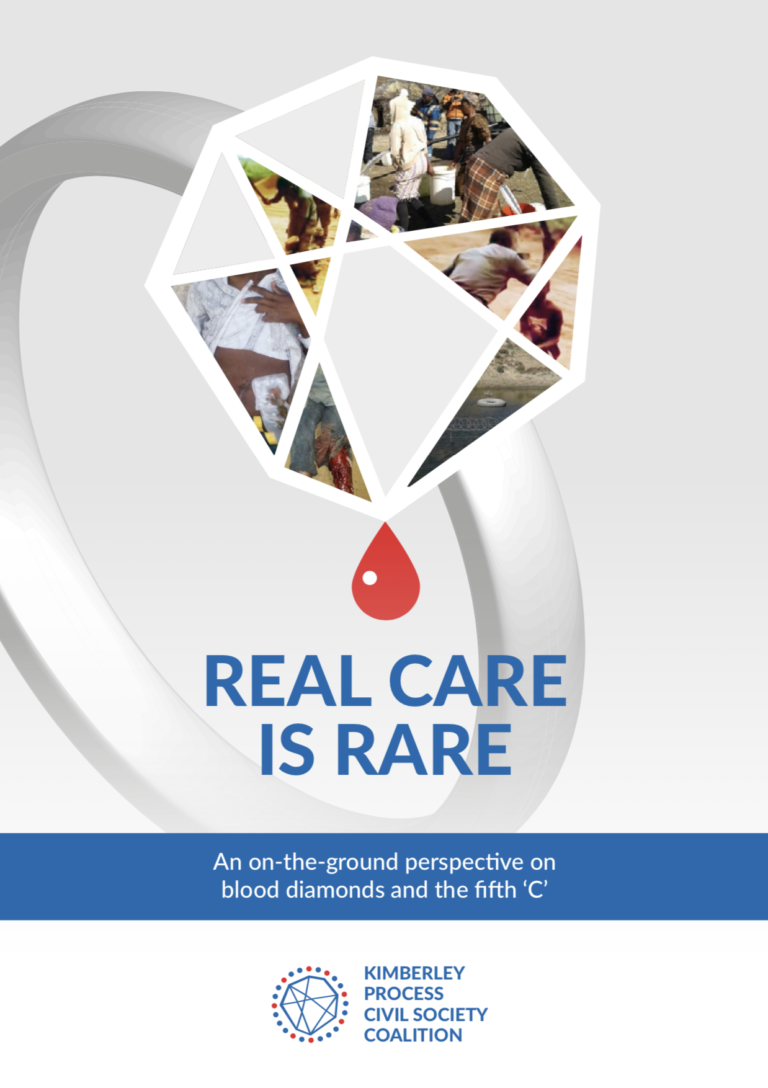 Real Care is Rare: An on-the-Ground Perspective on Blood Diamonds and the Fifth 'C' DOWNLOAD

Modern Slavery is an umbrella term that captures the range of multifaceted and complex crimes, which include all forms of human trafficking, forced labour, debt bondage, forced or servile marriage, and the worst forms of child labour. We know th...Read More

Money Laundering in the Commercial Sex Market in the United States