Council of Europe’s Group of Experts on Action Against Human Trafficking (GRETA), 2022

The Council of Europe’s Group of Experts on Action Against Human Trafficking (GRETA) has published its second evaluation report on the implementation of the Council of Europe Anti-trafficking Convention by Belarus. The report assesses progress in the implementation of the Convention since the publication of the first evaluation report by GRETA in 2017 until July 2022, including during the period marked by the unprecedented movement of migrants on Belarus’ borders in 2021.

GRETA notes positively several relevant legislative developments and changes in the procedure for the identification of victims of trafficking. It also welcomes the training provided to a range of professionals and the awareness-raising activities conducted.

GRETA urges the Belarusian authorities to strengthen their efforts to prevent trafficking for the purpose of labour exploitation, which should include improving the training and capacity of labour inspectors, supervising recruitment agencies, and providing migrant workers with effective access to confidential complaint mechanisms.

Children accounted for 32,5% of the officially identified victims of trafficking and related offences in 2017-2021. GRETA therefore calls on the authorities to develop programmes to reduce the vulnerability of children to human trafficking, in particular children placed in or leaving child-care institutions, children from rural areas and children in Roma communities.

GRETA regrets that the involvement of civil society in anti-trafficking work is limited and decreasing. During the visit to Belarus in September 2021, GRETA was unable to hold meetings with most of the NGOs involved in action against human trafficking, as they had been dissolved or their representatives had fled abroad for fear of persecution. GRETA is concerned that the widespread and systematic clampdown on civil society organisations in Belarus creates a significant risk that violations of human rights concerning victims of trafficking will not be recognised as such. It also severely reduces access to specialised assistance for victims.

GRETA’s visit took place during a period marked by the arrival in Belarus of tens of thousands of migrants, lured with false promises of easily crossing into the EU. Many of them remained stuck for prolonged periods of time on or near the borders with Poland, Lithuania and Latvia, without being able to claim asylum and have an assessment of their vulnerabilities. This unprecedented movement of migrants has created heightened risk of abuses, including trafficking in human beings. The information at GRETA’s disposal led it to conclude that the Belarusian authorities had not only failed to prevent trafficking of foreign nationals through Belarus, but had actively encouraged it and in doing so, may have themselves contributed to trafficking in human beings.

GRETA calls on Belarus to strengthen border controls to prevent and detect trafficking in human beings. This should include the provision of information to foreign nationals, in a language that they can understand, about the risks of human trafficking, their rights and where to turn for advice and assistance.

GRETA also urges the Belarusian authorities to strengthen their efforts to ensure that human trafficking cases for different forms of exploitation are investigated and prosecuted proactively, and lead to effective, proportionate and dissuasive sanctions. 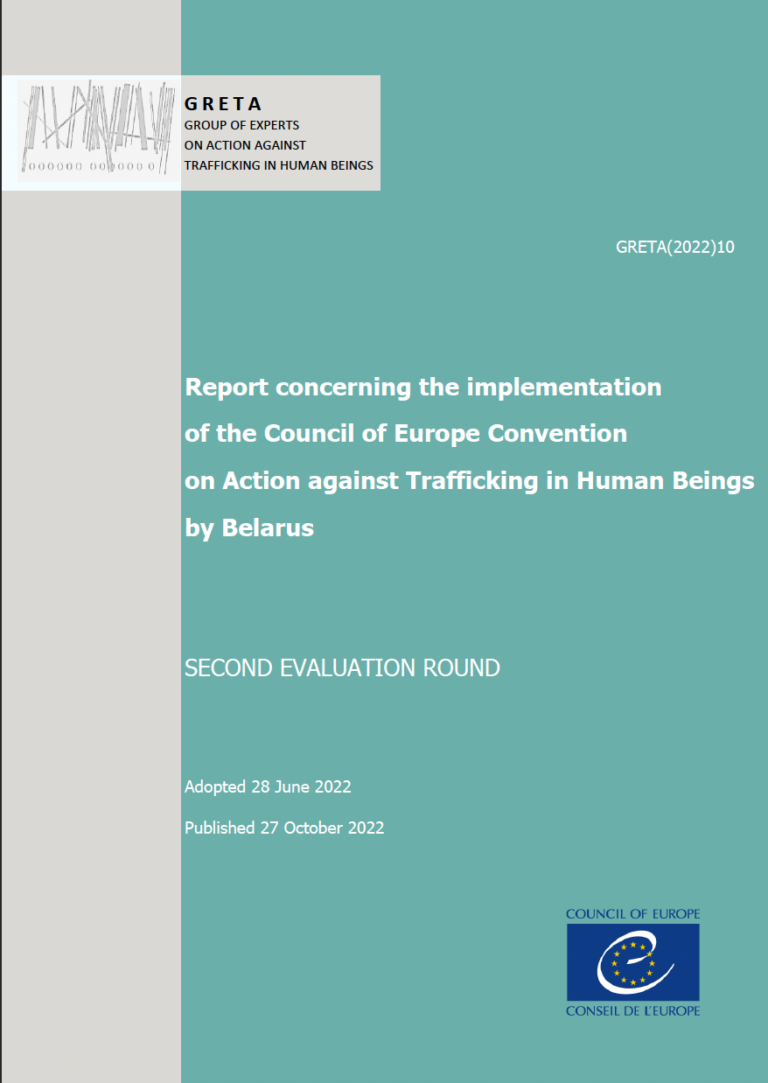 The NetClean Report 2016 provides an overview of global trends in child sexual abuse crime, especially on the channels that are used for the distribution of child sexual abuse material. The report is a unique insight into the experiences and accumula...Read More

Documenting the impact of new legislative acts is an indispensable tool for improving the effectiveness of this legislation and advancing business practice.