Sex worker rights organisations are creatively responding to violence, exploitation and other abuses within the sex industry, including instances of human trafficking, according to a new report published by the Global Alliance Against Traffic in Women (GAATW), Sex Workers Organising for Change: Self-representation, community mobilisation and working conditions.

This GAATW report is based on research conducted with sex worker organisations in seven countries: Canada, Mexico, Spain, South Africa, India, Thailand and New Zealand. It highlights cases where sex workers, or sex worker organisations, learnt of situations where a woman was experiencing violence, working under unacceptable conditions, or was brought to the industry through force or deception, for the purpose of exploitation. In these instances, sex workers resolved the issue as a collective, by providing advice and referral to other organisations, negotiating with the brothel owner/madam, chasing the pimp out of their area, or gathering money to help the woman return home.

Beyond support for individual cases, this report also documents how sex worker rights organisations mobilise sex workers and their allies to resist stigma, discrimination and oppression, and to collectively voice their concerns, demand their rights, and participate in public and political life. This type of collective action builds confidence in sex workers and helps them better protect themselves and their peers against violence and abuse.

Ultimately, the report demonstrates that sex worker rights organisations are human rights organisations whose primary mandate is to ensure that the human, economic, social, political, and labour rights of the people they work with are recognised and respected by state and non-state actors. The authors hope that it will lead to a new approach to addressing human trafficking in the sex industry—one that is based not on criminalisation and indiscriminate “raids and rescues” but on meaningful engagement with those in the industry themselves.

Read this information in different languages on the GAATW website here. 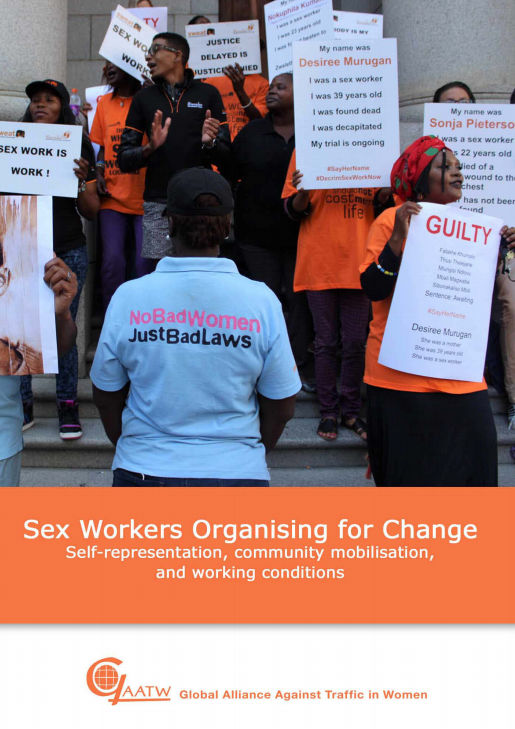 Abstract Through an empirical study, this article explores the overall profile of female traffickers of children in China and their role and performance in the trafficking processes. Its contribution to the human trafficking literature lies in i...Read More

The report is an industry-focused analysis of the Malaysian palm oil industry with specific insights into the industry’s governance and investment framework, relevant labour laws that apply to migrant workers in the industry and various dispute res...Read More

The rapid growth of digital technology has revolutionized our lives, transforming the way we connect and communicate. Internet access, mobile devices and social media are now ubiquitous, especially among children. Of the 4.5 billion people with acce...Read More

No Worker Left Behind: Protecting Vulnerable Workers from Exploitation During and After the COVID-19 Pandemic

This briefing builds on the understanding that labour exploitation is part of a spectrum ranging from labour compliance through to labour law violations, culminating at extreme exploitation in the form of forced labour. Research by FLEX and others s...Read More