“We work like robots”: Discrimination and Exploitation of Migrant Workers in FIFA World Cup Qatar 2022 Hotels

“Here, the salary is not about what you bring to the table. I will never get the same salary as an Arab colleague. There is a lot of discrimination against people from Africa. We are only hired in some types of jobs – security, housekeeping, the kitchen.”

“We are in direct contact with guests, so female housekeeping staff are not allowed to work alone. We work in pairs-male and female staff together. We do not enter any rooms without a colleague. Housekeeping work is risky-we might get assaulted or accused of stealing. We have to be very careful.”

In this report, women and men from Africa and Asia working at Qatar World Cup hotels describe – in their own words, the sexual harassment, nationality- and gender-based discrimination, wage theft, health and safety risks, sudden loss of employment, and illegal recruitment charges they faced in their work. The legal and governmental context fuels these rights violations: Workers are denied the fundamental right to associate, subjected to intensive surveillance and employer control, and fear retaliation-including employer-instigated deportation – for defending their rights and interests.

These violations of workers’ rights at FIFA World Cup Qatar 2022 partner hotels are the predictable result of policies that deny workers their right to associate, permit discrimination based on nationality and migration status, and grant employers control over migrant workers’ rights to move and work, exposing them to discrimination and abuse. As FIFA well knows, Qatar has a “de facto caste system based on national origin, which results in structural discrimination against non-citizens, including as the result of immense power imbalances between employers and migrant workers rooted in the kafala system that historically structured labour relations in Qatar,’’ according to a UN special rapporteur’s April 2020 finding that the FIFA Human Rights Advisory Board’s included in its closing report.

Addressing the problems identified by our investigation requires the dedicated efforts of the State of Qatar, FIFA, and the multinational hotel groups hosting World Cup guests. Primary responsibility for establishing and effectively enforcing labour rights compatible with international minimums lies with states. However, FIFA acknowledges its own responsibility to uphold workers’ rights in its own operations and those of its event partners. The multinational hotel groups’ own responsibility to provide decent work must too be acknowledged, along with their power to set and enforce standards in their capacities as hotel owners, operators, and franchisors. Our investigations demonstrate that while some multinational hotel groups have anti-racism and anti-discrimination policies and enforcement plans, they have failed to protect migrant workers at FIFA World Cup Qatar 2022 hotels from racism, discrimination, and abuse.

Qatar has made improvements in its labour regime following its 2010 selection as host of the 2022 FIFA World Cup. Equidem and GLJ-ILRF urge the state to continue its work towards international minimum standards for its over 2 million migrant workers in the years following the Cup. Working with the International Labour Organisation since 2018, Qatar established a non-discriminatory minimum wage, developed an electronic payment system to promote timely and full payment of wages, and established some procedures to identify and remedy violations of workers’ rights. New laws have blunted some of the harshest features of the kafala system, allowing migrant workers more freedom to change jobs without employers’ permission. Qatar, Bahrain, and Saudi Arabia have taken some similar measures to curb employers’ control over workers. Despite recent reforms, significant challenges to implementation and enforcement remain in Qatar and elsewhere, as this report documents.

Where workers lack the freedom to associate and act collectively, initiatives led by the state, FIFA, and its hotel partners will remain inadequate to provide decent work or address the discrimination and abuse migrant workers suffer. Significant power imbalances between workers and employers will continue to obstruct the exercise and enforcement of migrant workers’ rights under domestic and international human rights law. The law of Qatar, particularly its ban on migrant worker unions, denies workers the freedom to protect their own rights and interests, undermining its workers’ rights initiatives.

More than one million fans and tourists are anticipated at the FIFA World Cup Qatar 2022. Over the course of the 28-day tournament, they will stay in up to 130,000 rooms in hotels belonging to these 17 multinational hotel groups and others. These global games have the potential to promote respect for human rights not only in the establishments hosting teams and fans, but throughout the hospitality industry and the hotel networks operated by the 17 multinational hotel groups discussed here. Equidem and GLJ-ILRF wrote to FIFA, the Supreme Committee for Delivery and Legacy, the Qatar authorities, and all of the businesses mentioned in this report prior to publication. Representatives of Accor and Marriott provided responses in relation to their hotels mentioned in the report. 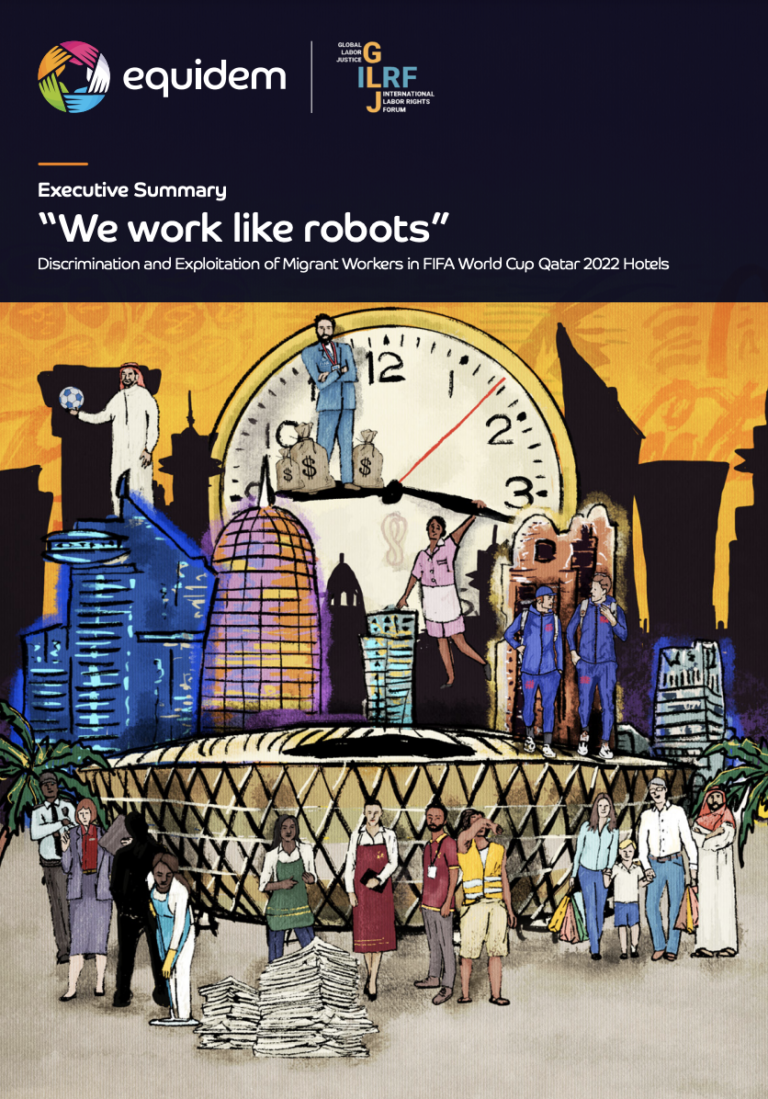 Sustainability Reporting and Human Rights: What Can Big Data Analysis Tell Us About Corporate Respect for Human Rights?

Since the adoption of the UN Guiding Principles on Business and Human Rights (UNGPs) in 2011, corporate respect for human rights has become an expected standard of conduct for businesses, discharged primarily through the process of human rights due ...Read More

Confessions of a Sweatshop Inspector

I remember one particularly bad factory in China. It produced outdoor tables, parasols, and gazebos, and the place was a mess. Work floors were so crowded with production materials that I could barely make my way from one end to the other. In one ar...Read More

Modern Slavery is an umbrella term that captures the range of multifaceted and complex crimes, which include all forms of human trafficking, forced labour, debt bondage, forced or servile marriage, and the worst forms of child labour. We know th...Read More