What Works: Lessons in the Use of Cash Transfers

Cash transfers are used as a tool to empower and protect vulnerable individuals, households, and other groups from shocks and to mitigate vulnerabilities, such as low and variable income. These transfers can also be used to encourage positive change and behaviours among these groups, including increasing school attendance and reducing the incidence of early marriage. Of the 179 evaluations catalogued in the Promising Practices Database, just under nine percent contained some element of financial or in-kind relief. This policy paper sets out our observations on which practices work, which look promising, and which are ineffective based on the initial dataset for conditional and non-conditional cash transfers, to better inform future program design. 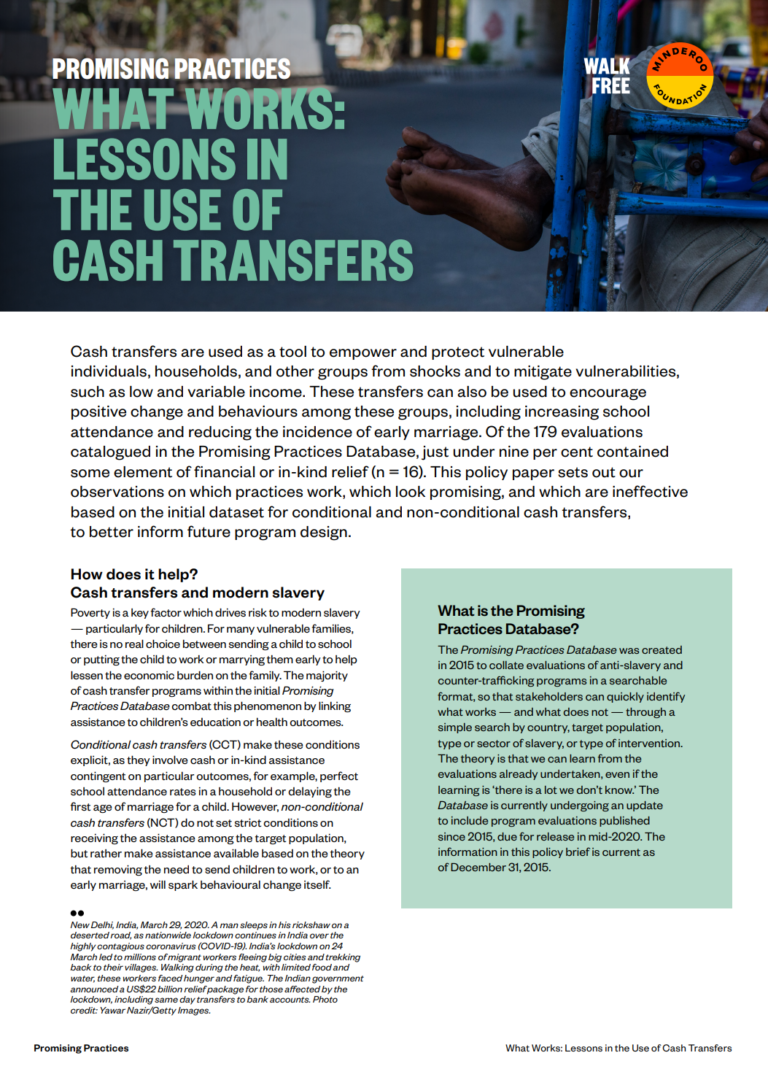 What Works: Lessons in the Use of Cash Transfers - Walk Free, 2020 DOWNLOAD

Survival at the Expense of the Weakest? Managing Modern Slavery Risks in Supply Chains During COVID-19

This paper reflects on the implications of the Coronavirus (COVID-19) pandemic on modern slavery risks in supply chains. We first reason that the global supply and demand shock resulting from COVID-19 exacerbates workers’ vulnerability to modern s...Read More

The Impact of COVID-19 on Modern Slavery and Human Trafficking

This publication provides an overview of the epidemic of modern slavery and human trafficking, surveys some of ways that these challenges have been negatively transformed by COVID-19, and explores how approaches rooted in principles of computational...Read More

There are over 40 million people in modern slavery worldwide. Modern slavery exists in every industry, in every country in the world. The financial services industry has a major role to play in combating this violent and abusive business. And yet ou...Read More