Without Rules: A Failed Approach to Corporate Accountability

Many global businesses are run with consideration for the well-being of the people whose lives they touch. But others—whether through incompetence or by design— seriously harm the communities around them, their workers, and even the governments under which they work. Much of the problem lies with companies themselves—even those that think of themselves as ethical. Too many still deal with human rights problems on the fly, without forethought and often in a de facto regulatory vacuum that they lobby vigorously to maintain. In many parts of the world, company human rights practices are shaped by self-created policies, voluntary initiatives, and unenforceable “commitments”—not by binding laws and regulations. History’s long and growing catalogue of corporate human rights disasters shows how badly companies can go astray without proper regulation. Yet many companies fight to keep themselves free of oversight, as though it were an existential threat. 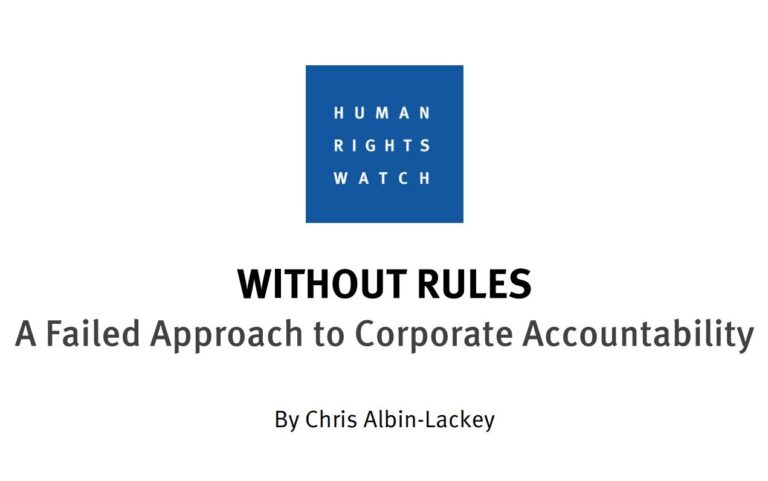 The UN Guiding Principles on Business and Human Rights are a set of guidelines for States and companies to prevent, address and remedy human rights abuses committed in business operations. child labour

Migrant and Child Labour in Thailand’s Shrimp and Other Seafood Supply Chains: Labour Conditions and the Decision to Study or Work

The study aims to strengthen the evidence base on child labour and the labour conditions of migrant workers in Thailand’s shrimp and other seafood supply chains, with a particular focus on communities engaged in these industries. Its objective is ...Read More

Sowing the Seeds: Children’s experience of domestic abuse and criminality

This report explores the overlap between children’s experience of domestic abuse and children’s offending behaviour and makes recommendations for early intervention and consistent practice. This review is published in the midst of the Coronaviru...Read More