This report found that while technology companies are working to bring the world closer together, they are failing to connect with workers in their own supply chains. Our ICT benchmark ranked the top 40 global ICT companies—with a combined market capitalization of $4.7 trillion—on how they address forced labour in their supply chains.

This year, Intel, the leader of the benchmark, overtook both Apple and HP since our 2016 ICT benchmark. Overall, major companies, including Intel, HP, Apple, and Hewlett Packard Enterprise, scored highest in the benchmark, but other important players, notably Amazon, did not perform as well. At the same time, Broadcom reduced its public disclosure dramatically, resulting in an 81% decrease in their score compared to 2016.

While the majority of companies have made improvements since 2016, the report’s findings indicate that the sector as a whole needs to take stronger actions to protect vulnerable workers in their supply chains. Specifically, worker voice and recruitment, the two areas that have the most direct impact on worker’s lives, continue to be among the lowest scoring themes.

“This is the first time we’ve been able to measure companies’ progress against where they were two years ago,” said Kilian Moote, project director of KnowTheChain. “It’s encouraging that companies are starting to address forced labour. But this benchmark shows that the sector needs to advance their efforts further down the supply chain in order to truly protect vulnerable workers.”

In addition to ranking 40 ICT global companies and providing an analysis of company policies, the benchmark provides recommendations for companies on a path forward. Specifically, the report urges companies to engage with workers, give them access to effective grievance mechanisms, and tackle the exploitation of migrant workers by implementing ethical recruitment practices and repaying workers for recruitment fees they may have paid. 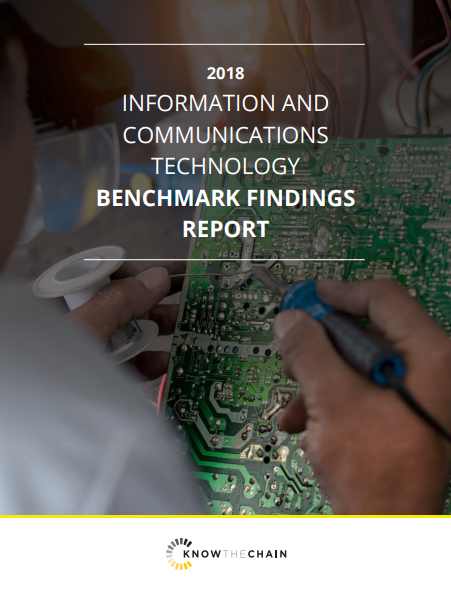 This report benchmarked 20 information & communications technology (ICT) companies (see below) on their efforts to eradicate forced labor from their global supply chains. The companies were selected on the basis of their size (market cap) and the extent to...

Benchmarks can play a powerful role in encouraging companies to uphold labor standards and protect workers’ rights. In 2016 KnowTheChain has benchmarked 60 large global companies in the Information & Technology Communication sector on their efforts to address forced labor...

The global electronics sector is comprised of powerful corporations—the 49 largest information communications and technology (ICT) companies have a combined market capitalization of US $5 trillion and combined annual profits of almost US$1 trillion. This brings with it a duty...

Working in Marks and Spencer’s food and footwear supply chains

Marks & Spencer (M&S) sets itself high standards. Its Plan A was widely recognized as breaking new ground in sustainability reporting when it was launched in 2016. In addition, M&S has achieved high rankings on human rights indices and, ...Read More

This research study addresses legal issues around child online protection and the herewith related risk of becoming a victim of online sexual exploitation, in particular child pornography or online grooming.  It serves as a supplementary gui...Read More