Child domestic work is a hidden form of child labour driven by poverty and social norms. However, little is known about the situations of child domestic workers. This study aims to describe and analyse gender-specific working conditions, health, and educational outcomes among hidden child domestic workers (CDWs) living in third-party homes relative to married children, biological children, and other children in kinship care. Data from the 2019 Zimbabwe Multiple Indicator Cluster Survey (MICS) were analysed. Descriptive statistics and bivariable logistic regression were used to describe frequency and estimated prevalence. Directed Acyclic Graphs (DAGs) were used to identify exposures and inform the selection of covariates. Multivariable logistic regression models were fitted to estimate the effect of each exposure variable. The prevalence of CDWs was 1.5% and CDWs were mainly girls and living in much wealthier households with more educated household heads while married girls were living in much poorer households. When compared among girls themselves, being a CDW was significantly associated with having a functional disability, while married girls were more frequently engaged in hazardous working conditions. We provide the first intersectional analysis comparing work, violence, and health outcomes among CDWs, married children and other children. Child protection measures are needed to safeguard children in domestic work and marriages. 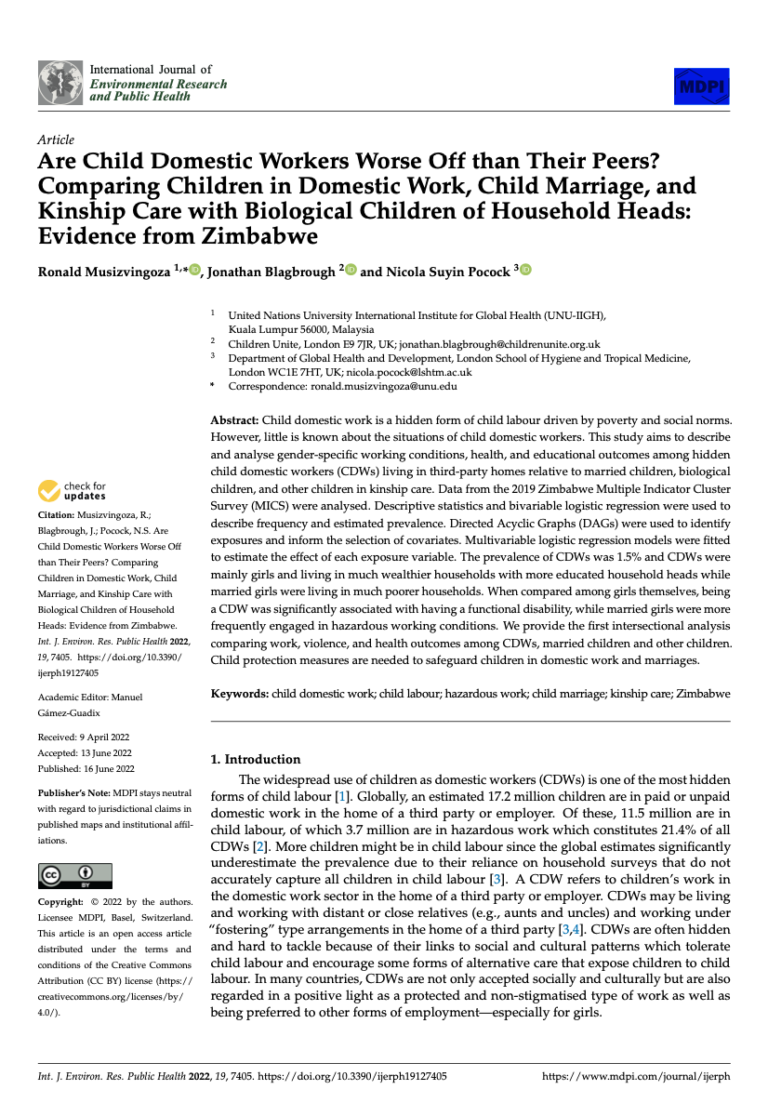 The objective of the IPEC+ Global Flagship Programme – in line with target 8.7 of the 2030 Sustainable Development Agenda, adopted by the United Nations in 2015 – is to provide ILO leadership in global efforts to eradicate all forms of child la...Read More

This publication documents the process of foreign recruitment in case-study migration corridors across different regions. The result of the research brings to the fore the abuse of migrant workers by recruiters and seeks to contribute to broadening...Read More

The report looks at Canada’s connection to the issues of human trafficking and forced and child labour, by cross-referencing recent data on Canadian imports with the U.S. Department of Labour’s List of Goods Produced by Child Labour or Forced Lab...Read More

Information Leaflets for Victims of Trafficking

The CARE and TACT leaflets can be used as examples to develop information materials for victims of trafficking willing to return to their country of origin. These leaflets are tools that should be used by professionals during discussions with the vi...Read More