Emerging from tragedies in Bangladesh: A challenge to voluntarism in the global economy

Under the regime of private company or multi-stakeholder voluntary codes of conduct and industry social auditing, workers have absorbed low wages and unsafe and abusive conditions; labour leaders and union members have become the targets of both government and factory harassment and violence; and trade union power has waned. Nowhere have these private systems of codes and audits so clearly failed to protect workers as in Bangladesh’s apparel industry. However, international labour groups and Bangladeshi unions have succeeded in mounting a challenge to voluntarism in the global economy, persuading more than 180 companies to make a binding and enforceable commitment to workers’ safety in an agreement with 12 unions.

The extent to which this Bangladesh Accord will be able to influence the entrenched global regime of voluntary codes and weak trade unions remains an open question. But if the Accord can make progress in Bangladesh, it can help to inspire similar efforts in other countries and in other industries. 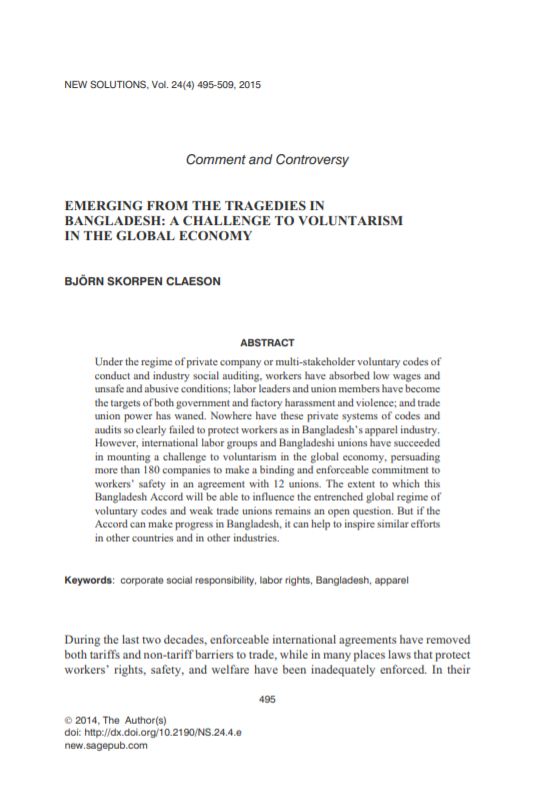 Emerging from tragedies in Bangladesh: A challenge to voluntarism in the global economy- International Labor Rights Forum, 2015 DOWNLOAD

In its third report on Austria, the Council of Europe’s Group of Experts on Action against Trafficking in Human Beings (GRETA) analyses trafficking victims’ access to justice and effective remedies and examines progress in the implementation of ...Read More

Workers’ conditions in the textile and clothing sector: just an Asian affair? Issues at stake after the Rana Plaza tragedy

Written by Enrico D'Ambrogio More than 70% of EU imports of textile and clothing come from Asia. Many Asian workers have to work in sweatshop conditions, but the issue appears in global media only when major fatal accidents occur, like that at Ra...Read More

The first full version of the Corporate Human Rights Benchmark is out. The results are revealing; there is a race to the top in business and human rights performance, but this is only amongst a welcome cluster of leaders while the great majorit...Read More