FTSE 100: At the Starting Line - An analysis of company statements under the UK Modern Slavery Act

The FTSE 100 companies who have reported under the Modern Slavery Act so far were scored by the Business & Human Rights Resource Centre on their action to eliminate slavery from their operations and supply chains and the extent of their disclosure under the Act. Companies were put into ten tiers (tier one the best performing, ten the worst performing). There was also patchy compliance with the legal requirements of the Act. Only 14 of the 27 statements fully comply with these three requirements.

Analysis shows most of the twenty-seven FTSE100 companies that have reported so far under the UK Modern Slavery Act are missing the opportunity to provide much needed leadership to eradicate forced labour from business operations and supply chains. The majority of company statements demonstrate weak risk assessment and due diligence. 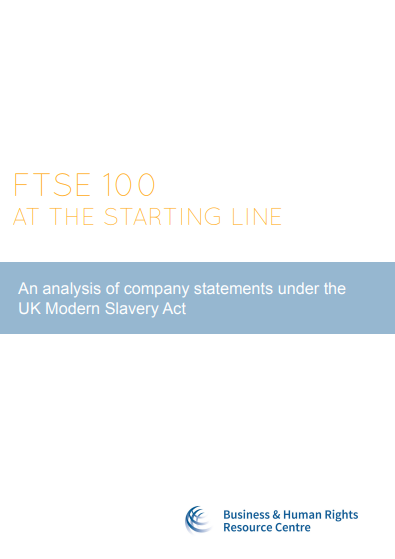 Modern Slavery Registry (http://www.modernslaveryregistry.org/) is a free, transparent and publicly accessible registry of company statements published pursuant to the UK Modern Slavery Act and the California Transparency in Supply Chains Act. The Registry, with its over 4,000 statements, is a valuable...

First Year of FTSE 100 Reports under the UK Modern Slavery Act: Towards Elimination?

The International Labour Organization estimates that illicit profits from modern slavery reach $150 billion a year. In 2016, 16 million people were victims of forced labour in the private economy. Companies are exposed to modern slavery risks through their own...

In 2015, the UK Government introduced the Modern Slavery Act (MSA), which requires certain companies publish an annual statement detailing what steps they have taken to tackle modern slavery, both in their operations and in their supply chains. Busin...Read More

Identifying particularly vulnerable groups of children and their specific needs is essential for the elimination of child labour. Article 7 of International Labour Organization (ILO) Convention No. 182 on the Worst Forms of Child Labour, 1999 – th...Read More