NORC at the University of Chicago, November 2021

As a part of its partnership with the U.S. Department of State’s Office to Monitor and Combat Trafficking in Persons (TIP Office), the Global Fund to End Modern Slavery (GFEMS) is launching a series of projects to combat commercial sexual exploitation of children (CSEC) in coastal Kenya. NORC at the University of Chicago was contracted by GFEMS to lead an independent research study to obtain pre- and post-intervention point estimates of the count of CSEC victims/survivors in Mombasa, Kilifi, and Kwale counties of Kenya.

Our primary methodological approach for obtaining CSEC point estimates is link-tracing, a variation of two common approaches used to measure hidden and hard-to-reach populations, including respondent driven sampling (RDS) and mark-recapture (or “capture-recapture”). RDS provides a way for researchers to quickly recruit members of a hidden population even when there is no readily available sampling frame, however it is designed to estimate the average value of traits or outcomes in the population rather than provide point estimates. RDS-based inference also typically relies on unverifiable assumptions that imposes heterophily constraints on the network structure, as well as the fact that the population is well-networked enough to obtain a census with enough sample waves. Mark-recapture is designed to provide point estimates, however it typically relies on self-selection of individuals and assumes that a mathematical model can be fitted to the pattern of captures to extrapolate an estimate of the population size.

Link-tracing combines the strengths of RDS and mark-recapture to provide an efficient way to estimate the size and characteristics of a hidden population of interest. In summary, (1) link- tracing occurs in the same fashion as RDS but does not place any sampling constraints on the individuals and therefore the network sample is not restricted to forming a tree-like structure; (2) the designs allow for “overlaps” between networks to be observed, through multiple observations (i.e., redemption of more than one referral coupon) of individuals, giving rise to a more comprehensive and accurate representation of the population network; and (3) overlaps in networks can be exploited in a mark-recapture fashion for population size estimation. As such, link-tracing can produce hidden population counts cost-effectively and on a relatively broad scale. 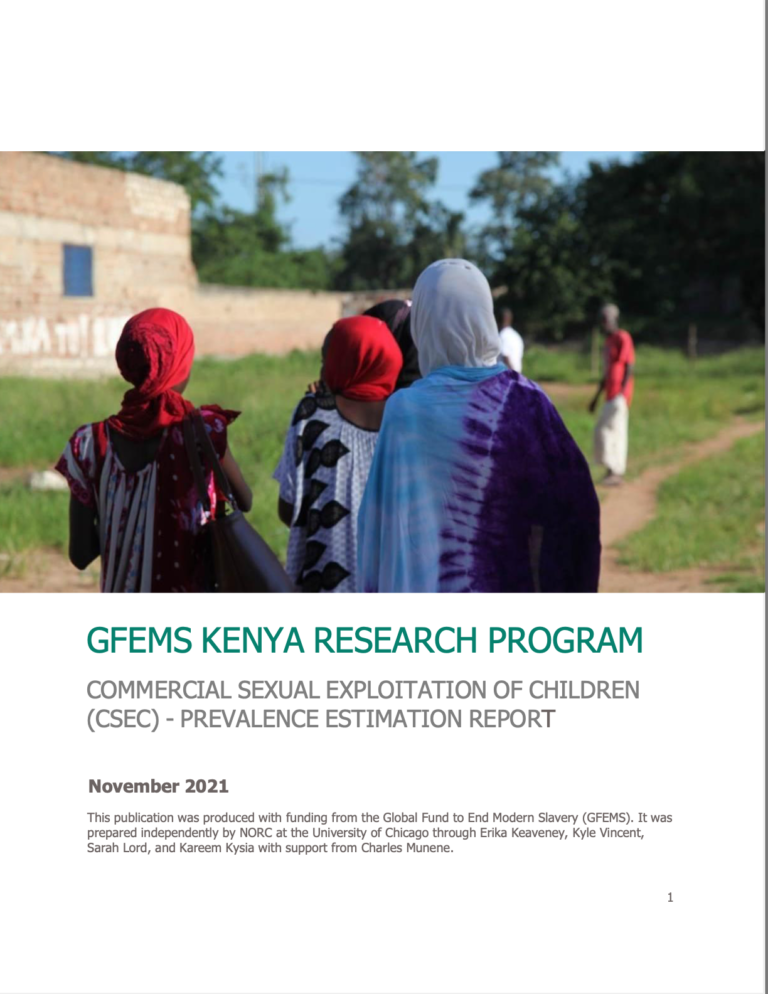 Modern slavery is an umbrella term that covers: all situations of exploitation that a person cannot refuse or leave, because of threats, violence, coercion, abuse of power or deception. Modern slavery sits at the extreme end of a spectrum o...Read More

Still Struggling: Migrant Construction Workers in Qatar During the Pandemic

This report uses Qatar as a case study to examine how the global public health crisis affected destitute migrants in the Middle East and how employers and the government responded. It also makes a series of reform recommendations that would promote ...Read More

The COVID-19 pandemic has had a huge impact on the practice of many professionals, including those in the field of child protection. In order to support front line workers and managers in their work to protect children during this ...Read More

Consolidated Learnings from Research on Overseas Labor Recruitment in Vietnam

This briefing document synthesizes the key themes emerging from GFEMS-funded research and advocacy efforts focused on Vietnamese labor migration between 2018-2020. Findings represent inputs from a range of labor migration stakeholders including gove...Read More