Discussion about mandatory human rights due diligence (HRDD) for corporations is currently on the political agenda of at least 12 European Union member states as well as EU institutions. The EU Commission has announced an HRDD law and the European Parliament has formulated specific requirements for it. 2 After France, Germany has now also passed a corporate supply chain law (Lieferkettengesetz) that will come into force in 2023. Highly debated is the question of whether such HRDD laws should contain civil liability for companies, and if so, for which companies. While some commentators say an HRDD law without liability would lack any teeth and is therefore unacceptable, others can only conceive of including liability if audits and certification schemes function as the practical instruments to “resolve” the issue of mandatory HRDD. Initially overwhelmed by the challenges of seemingly vague human rights language, companies now hope to outsource the work of doing human rights risk assessments, correctional action plans and progress reports by hiring external auditors and certifiers. This discussion about civil liability and outsourcing artificially narrows the focus of the broader debate on mandatory HRDD down to one of many possible enforcement mechanisms—liability—and the attempts to alleviate its impact. 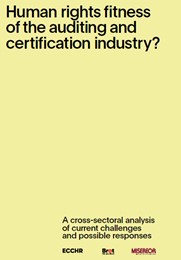 Human rights fitness of the auditing and certification industry? DOWNLOAD

Rapid change in the legal landscape for business with regards to human rights has profound implications for how businesses across the globe approach human rights issues. Multinational companies are having to navigate increasingly complex human right...Read More

The breakdown of the social contract is exposed in the 2020 ITUC Global Rights Index with violations of workers’ rights at a seven-year high. The trends by governments and employers to restrict the rights of workers through violations of collecti...Read More

This report provides an analysis of the data collected, maps specific migration corridors in which organizations have encountered a high number of cases of exploitation, and analyses ways in which the data can be used to build influence and cooperat...Read More

Respect for Human Rights: A Snapshot of the Largest German Companies

The German government has set a 2020 target for at least 50% of German companies with more than 500 employees to  have  introduced effective human rights protections.  The current coalition Government has agreed to pass laws and push...Read More