A major cause of forced labour in global supply chains is the charging of recruitment fees to migrant workers. Some companies have sought to reimburse workers charged these fees, many face serious challenges in doing so.

Reimbursing worker-paid fees is an important step consistent with the UN Guiding Principles on Business and Human Rights, which clarify the baseline expectation for companies to respect human rights, including providing for or cooperating in remediation when they have caused or contributed to adverse human rights impacts.

This report profiles six multi-national companies who have sought to address access to remedy by reimbursing workers found to have paid fees. Each of the remediation programmes vary in size and structure and have been shaped by the local contexts in which these companies operate. Together, they have provided a form of remedy for thousands of workers amounting to millions of dollars in the last decade. 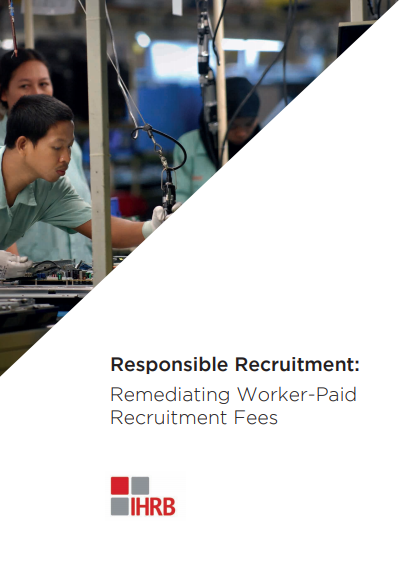 This publication contains the “Guiding Principles on Business and Human Rights: Implementing the United Nations ‘Protect, Respect and Remedy’ Framework”, which were developed by the Special Representative of the Secretary-General on the issue of human rights and transnational corporations and...

This report is the second of two reports developed by IHRB in cooperation with Equidem Research & Consulting. Building on “Responsible Recruitment: Remediating Worker-Paid Recruitment Fees“, this publication offers practical guidance to businesses seeking to recruit responsibly in challenging environments....

In July 2018, the Walk Free Foundation released the latest Global Slavery Index (GSI), which presents estimates for the number of victims of modern slavery in 167 countries. Using data from the Gallup World Poll’s module on modern slavery, which w...Read More

The NetClean Report 2016 provides an overview of global trends in child sexual abuse crime, especially on the channels that are used for the distribution of child sexual abuse material. The report is a unique insight into the experiences and accumula...Read More