This report draws on interviews and surveys with migrant construction workers in London to examine the causes of labour abuses that can lead to exploitation in the construction sector.

The report calls for urgent action by the Government, the Director of Labour Market Enforcement, the Mayor of London and the construction industry to put an end to abuse of London’s construction workers.

Abuses uncovered
The construction industry is a vital part of the UK economy, but has been recognised as high-risk for exploitation and modern slavery. In their research, Focus on Labour Exploitation (FLEX) uncovered a range of abuses happening in the low-paid sections of the industry, where work is often short-term and insecure making it difficult for workers to complain. One in three migrant workers surveyed had not been paid for work, and one third had faced abuse or discrimination. Following the Brexit vote, 15% said they were wrongly told they can no longer work in the UK.

Flexibility and fear put workers at risk
The construction industry relies on a flexible workforce to fill worker shortages quickly. When costs run high, labour is often cut to save money. Many workers are self-employed, and so have little security or protection against abuse, others are not given contracts setting out the terms of their employment. The threat of being fired at short notice, combined with lack of protection, means that often workers who face problems are too afraid of being left out of work to challenge unscrupulous employers or seek help through official channels. Those workers FLEX interviewed felt they had no choice but to endure poor conditions, as they couldn’t afford to risk losing their jobs by complaining.

Day labourer Darius* was made to do extremely dangerous work, or risk being fired. He told FLEX: “They just tied a cable around my waist, and the guy on the roof had another cable around his waist and this is how we did things. I had to do it, otherwise they sent me home. If I said I didn’t want to do it, they would say: go home, we’ll find another. And I didn’t have a contract.”

London is constantly under construction, but FLEX’s report shows that much more needs to be done to protect the workers building its homes and offices from exploitation. As Brexit brings changes for UK economy and industry, we must make sure that the migrant workers the construction sector relies on are safe from abuse and protected from exploitation.

*not his real name 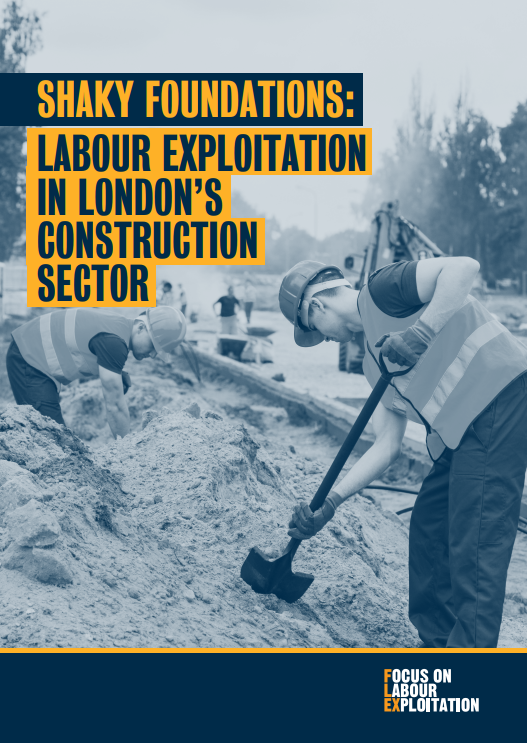 FLEX has published a new report revealing a range of labour abuses and risk of exploitation in London’s construction sector, including workers not being paid, being physically and verbally abused, and being forced to work in dangerous conditions. Their report,...

Expo 2020 Dubai could not have taken place without migrant workers who make up more than 90% of private sector employees in the UAE. With more than 40,000 workers employed in the construction process alone. Similarly, the delivery of the Expo requir...Read More

The Public Health Impact of Coronavirus Disease on Human Trafficking

The Role of the Financial Sector in Eradicating Modern Slavery: CEOs Respond to the Independent Anti-Slavery Commissioner

However, business leaders need to collaborate in order to do this. My recommendations focus on the need to develop relevant risk management processes and the need to create better systems to share intelligence. I also strongly encourage growing coll...Read More