Working in Marks and Spencer’s food and footwear supply chains

Marks & Spencer (M&S) sets itself high standards. Its Plan A was widely recognized as breaking new ground in sustainability reporting when it was launched in 2016. In addition, M&S has achieved high rankings on human rights indices and, based on interviews for this project, colleagues take pride in its values and high standards. M&S asked Oxfam to identify human rights and worker wellbeing issues in their supply chains as part of a collaborative research project. The company has shown itself willing to engage on difficult issues, by opening its doors to Oxfam so that it could:

Oxfam’s interviews with 390 workers across food manufacturing sites in the UK and footwear factories in India supplying M&S revealed a range of concerns among workers, as well as examples of good practice on which the company can build. The scope of the study, agreed between M&S and Oxfam, focused on gender equality, worker voice and in-work poverty. It involved interviews over a period of 28 days within a six-month period. The nature of a deep-dive qualitative study and the need to protect workers’ anonymity mean that the findings are based on workers’ testimony and are not necessarily generalizable across or beyond the sites where the interviews were held. Nonetheless, the interviews provided valuable insights into the perspectives of a large sample of workers and managers in M&S supply chains, with important and consistent themes emerging:

These issues were generally more serious for women than for men in both countries, and for all workers interviewed in India compared with those interviewed in the UK. The workers and suppliers’ perspectives gathered matter both for workers’ wellbeing and to M&S’s business. If a worker believes they are taking a risk to speak up – and that nothing will change if they do – they will stay silent. If a manager thinks workers are unreasonable, workers’ ideas and solutions will not be valued. The results of this study echoed Oxfam’s research14 from the last 25 years into the global food and garment15 supply chains, which evidenced in-work poverty, gender discrimination, and poor communication between managers and workers. 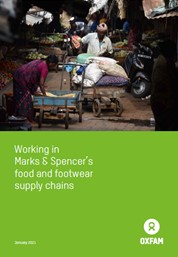 The following report evaluates and analyzes publicly available information regarding the level of progress H&M has achieved in addressing safety hazards in its factories in Bangladesh. The data is derived from factory inspection reports and Corr...Read More