For decades, workers, unions, students, and labour NGOs have joined together to try to hold global corporations accountable for the labour violations that have routinely taken place in their supply chains. Multi-faceted and often lengthy corporate campaigns have led to some workers in the supply chains of consumer-facing brands getting some measure of justice. However, “wins” have often been made on a factory-by-factory basis and have been fleeting due to the absence of meaningful reforms to business practices, weak labour laws and dysfunctional labour justice systems. More recently, binding transnational agreements have started to shift corporate behaviour across industries within a country, and litigation in some jurisdictions is putting direct pressure on parent companies and lead firms for what happens upstream. Still, the fundamental rules of the game have not yet been changed, meaning the quest for justice for most workers often remains well beyond reach (and even worse for marginalised groups of workers). Indeed, efforts which have been ongoing since 2016 to negotiate new rules to protect workers in global supply chains at the ILO stalled in 2020 due to concerted employer opposition. The essays and interviews in this issue of the Global Labour Rights Reporter seek to evaluate some of the efforts so far to embed labour rights in global supply chains and look to what might come next. 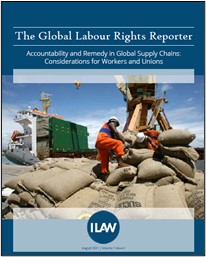 Accountability and Remedy in Global Supply Chains: Considerations for Workers and Unions_English DOWNLOAD 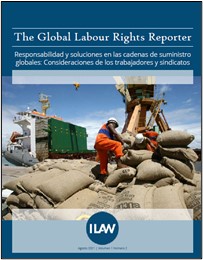 Accountability and Remedy in Global Supply Chains: Considerations for Workers and Unions_Spanish DOWNLOAD 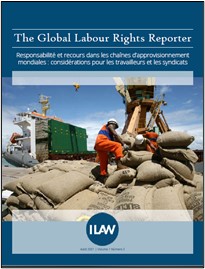 Accountability and Remedy in Global Supply Chains: Considerations for Workers and Unions_French DOWNLOAD

A United Faith Against Modern Slavery

Modern slavery in all of its guises – such as human trafficking, forced labour, sexual exploitation and organ trafficking – is endemic in many countries. It often preys on society’s most vulnerable people, stripping them of their rights to fre...Read More

The present report is submitted in accordance with Human Rights Council resolution 42/10. By providing examples from all geographical regions, it assesses the role of organized criminal groups in contemporary forms of slavery. To that end, the profi...Read More

The report provides an overview of how criminals adapt their misdeeds to the COVID-19 pandemic. It is based on information Europol receives from the EU Member States on a 24/7 basis and intends to support Member States’ law enforcement authorities...Read More

Ranking of the 100 Most Populous U.S. Cities

The following information is based on incoming communication to the National Human Trafficking Hotline via phone, email, and online tip report from December 7, 2007 – December 31, 2016 about human trafficking cases and issues related to human traf...Read More