Casting Light in the Shadows: Child and youth migration, exploitation and trafficking in Vietnam

This report presents findings from a 2 ½ year research study, led by a team of socio‐legal researchers at Coram International, aimed at strengthening the evidence base on child trafficking and labour exploitation in Vietnam. The report explores patterns and dynamics in child trafficking and labour exploitation, identifies particular factors that increase children’s vulnerability to trafficking, and examines survivors’ experiences of reintegration and access to support services. The research was conducted in partnership with UNICEF Viet Nam and UNICEF UK and supported by the UK Home Office’s Child Trafficking Protection Fund. Human trafficking has received considerable global attention over the past two decades, culminating in the adoption of the UN Convention Against Transnational Organised Crime, and its accompanying protocol, the Protocol to Prevent, Suppress and Punish Trafficking in Persons Especially Women and Children, by the UN General Assembly on 15 November 2000. Since then, numerous research studies have been undertaken on child trafficking: with the Mekong Delta region receiving particular attention, given the prominence of the sex industry in the region. Still, significant gaps in knowledge and understanding of child trafficking remain, due to challenges gathering evidence on what are often illicit and clandestine activities, and, equally, challenges defining and measuring a contested and politicised concept. This research was designed to contribute to existing knowledge and evidence on child trafficking in Vietnam. It aims to increase understanding of the phenomenon from the perspectives of children and young persons who have experienced trafficking. Our approach, described in greater detail in the methodology below, is inductive and empirically driven, developing analytical conclusions from the particular lived‐experiences and realities of children and young people in Vietnam. The study was designed and implemented by Coram International, in partnership with UNICEF Viet Nam and UNICEF UK. Data collection for the study was carried out by Coram International, the Research Centre for Female Labour and Gender (RCFLG), Institute of Labour Science and Social Affairs (ILSSA), Ministry of Labour, Invalids and Social Affairs (MoLISA), and the Institute of Human Studies (IHS) in Vietnam. 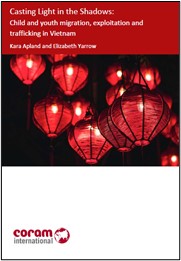 Casting Light in the Shadows: Child and youth migration, exploitation and trafficking in Vietnam, 2021 DOWNLOAD

This PhD aims to generate a better understanding of corporate social responsibility (CSR) in global production networks. CSR is an umbrella term that deals with voluntary activities undertaken by companies and that indicate an ethos to act responsib...Read More