In March 2020 Delta 8.7 published an article which argued that the pandemic would impact on modern slavery in at least three ways: by heightening risks for those already exploited, increasing he risks of exploitation and disrupting response efforts.1 Over the last year we have witnessed this predicted impact both in the United Kingdom and overseas. The pandemic has also greatly affected the way in which I was able to carry out my statutory responsibilities and my work, and that of the whole team, has gone online. While my face to face contact with survivors and frontline workers has not been possible and I have very rarely travelled, the use of online platforms has enabled me to speak at over 80 events, many with international participation. This annual report sets out my work using the framework of my strategic plan which was laid before parliament in October 2019. It draws attention to the events we have hosted and attended, the reviews that we have published and the letters that we have written during the year. I have continued to develop my approach to listen carefully, to take an independent view and base my contribution on evidence and data.  While some progress has been made, there is still much to do to support victims to become survivors living lives of sustainable independence. The successful prosecution of perpetrators of the most egregious offences remains infrequent and organised crime still regards trafficking in human beings as rewarding with a low risk of apprehension. After two years in this role I am even more convinced that the considerable research activity in this area could be contributing so much more to our practical understanding of what works in both survivor support and prosecution of offenders. EU Exit and the political focus on immigration both have the potential to impact on modern slavery and we have highlighted these risks to politicians and officials, in the media and in published reports. It is not my role to take a political position on either issue but to be constantly alert to the consequences for the identification of modern slavery victims and the potential to increase the vulnerability of people to traffickers and exploitative employers.  The pandemic has illustrated the vulnerability of workers and supply chains and I have placed priority on encouraging good practice in business, financial institutions, and labour market organisations. I am proud of our work on what businesses should learn from the UK’s largest anti-slavery prosecution, Operation Fort. A practical review led to good engagement with the supermarkets, the development of the IASC maturity matrix and a modern slavery intelligence network established by business. We also worked with Themis and the TRIBE Freedom Foundation to collate good practice in financial institutions and our review, ‘An agenda for action across the financial services sector’ led to constructive engagement with over 40 financial institutions.

The protection of victims who commit criminal offences as a direct consequence of their trafficking has continued to be a focus for our work. The prevalence of child exploitation in the county lines drug dealing model means that the statutory defence is frequently raised. A call for evidence prompted a good response and I concluded that there were considerable grounds for concern. The possibility of criminal exploitation was not being considered at the start of an investigation risking victims being wrongly prosecuted. However, there was also over-reliance on the trafficking decisions made by the Single Competent Authority and a failure to consider properly the legal components of the defence. This risks a case being discontinued when the matter could have been put before a jury. Most worryingly, in many cases it was clear that non-prosecution alone was not protecting a child or vulnerable adult – there needed to be effective safeguarding. This was not happening.  My work is supported by a small team of seven and all have worked with compassion and creativity, always industrious and focused on making a difference. I am extremely fortunate to have such a strong team and my thanks go to April, Katie, Jenna, Emma, Shelley, Ed and the seconded police officers Jenny, Nick, Helen, Rich and Kieran. 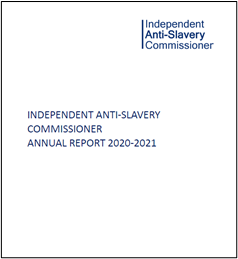 When moving towards mitigating or ultimately preventing trafficking in human beings and labour exploitation (THB/LE) in supply chains, a wider perspective is needed, one that includes human rights and decent working conditions. THB/LE is the extreme...Read More

This review has drawn upon findings from evaluations and research that has been carried out by academics and by government departments. It has identified that in some cases, there is an absence of an independent, published evaluation. To understand ...Read More