The Strength to Carry On: Resilience and Vulnerability to Trafficking and Other Abuses Among People Travelling Along Migration Routes to Europe

Around one and a half million people have travelled along the ‘Eastern Mediterranean route,’ the ‘Balkan route’ and the ‘Central Mediterranean route’ since 2015, in order to enter an EU country and apply for asylum or remain without regular immigration status. Migration routes lead through and from Turkey, where a number of routes converge from countries of origin in the Middle East (Syria, Iraq), West and South Asia (Afghanistan, Iran, Pakistan, Bangladesh) and Horn of Africa (Eritrea, Somalia, Ethiopia). From Turkey, people either travel by boat from the Western coast to nearby Greek islands in the North Aegean Sea, such as Lesvos, Chios and Samos, or cross the Evros River into Greece or Bulgaria.

This study analyses the incidence of human trafficking among people travelling along these routes; factors of resilience to human trafficking and other abuses; and factors of vulnerability to human trafficking and other abuses. Throughout the research findings, the significance of the context of these migration routes is evident. The geography of the routes, as well as the policies and practices applied during different periods in different places, all determine the experiences of the people using these routes. Experiences are also impacted by the length of the journey in terms of time, and the different obstacles encountered along the way, particularly obstacles that people had not prepared for in planning their journeys. A further determinant is the groups that people travel with for the different sections of the routes.

The research was designed as a multi-country research project, divided according to the countries under study, with a team of seven country researchers assigned to each country. However, in the course of conducting and analysing the field research, it became clear that this national perspective fits uneasily with the lived experiences and perspectives of people on the move. They usually perceive their experiences in terms of a route and a journey, and are less focused on which particular country they happen to be in, and more on the final intended destination. This study therefore also conceives of people’s experiences, and the factors of resilience and vulnerability that affect them, in terms of a journey from a country of origin or previous residence, through numerous transit countries, to the intended final destination country, or, for an increasing proportion of people since 2016, to a de facto destination country from which they have been unable to travel onwards.

Above all, because during most of the period 2015-2018, in most locations, these people were not allowed to travel regularly, interactions with providers of migrant smuggling services play a key role in determining people’s resilience or vulnerability. Many of the potential trafficking cases that were identified in the course of the research were connected to smuggling situations, either because people needed to pay for smuggling, or because people providing migrant smuggling services directly exploited their clients. Risks of exploitation due to the need to pay for smuggling and due to interactions with migrant smugglers were often exacerbated by difficulties in onward travel, lack of regular status and lack of access to the regular labour market. Simply put, when regular travel by plane, train or road is not permitted, the circumstances of travel are the determining factor of people’s experiences. 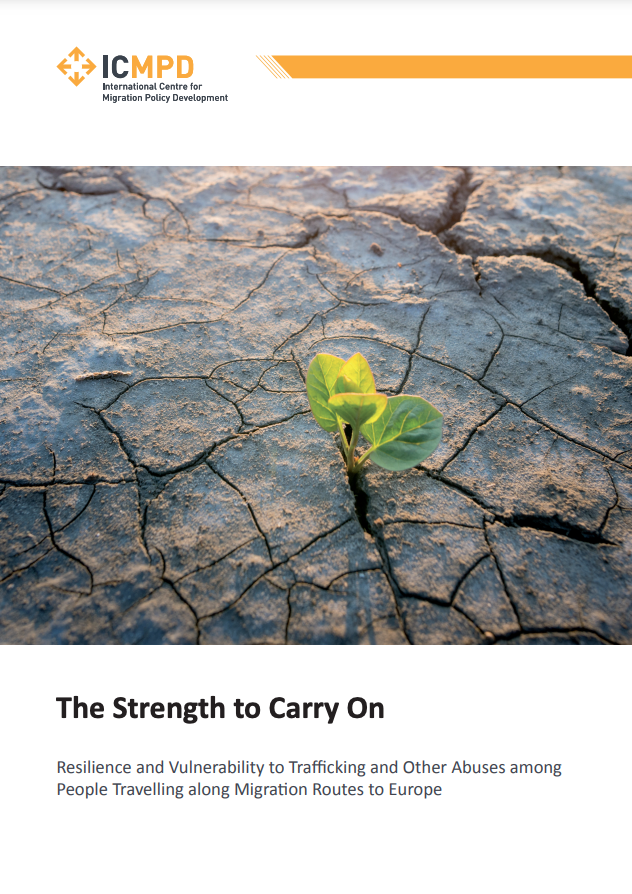 The Strength to Carry On: Resilience and Vulnerability to Trafficking and Other Abuses Among People Travelling Along Migration Routes to Europe (Full Study) - International Centre for Migration Policy Development, 2019 DOWNLOAD 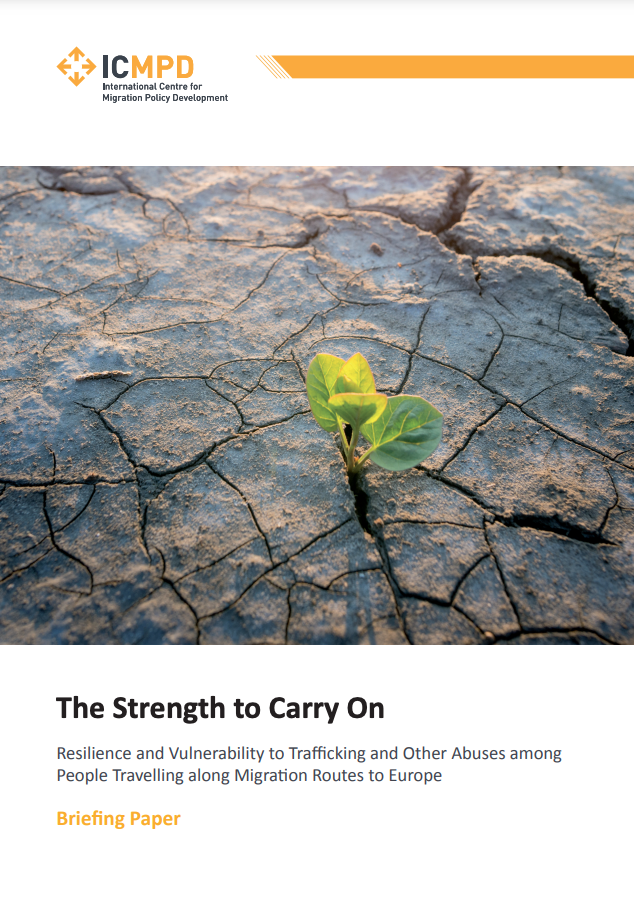 The Strength to Carry On: Resilience and Vulnerability to Trafficking and Other Abuses Among People Travelling Along Migration Routes to Europe (Briefing Paper) - International Centre for Migration Policy Development, 2019 DOWNLOAD 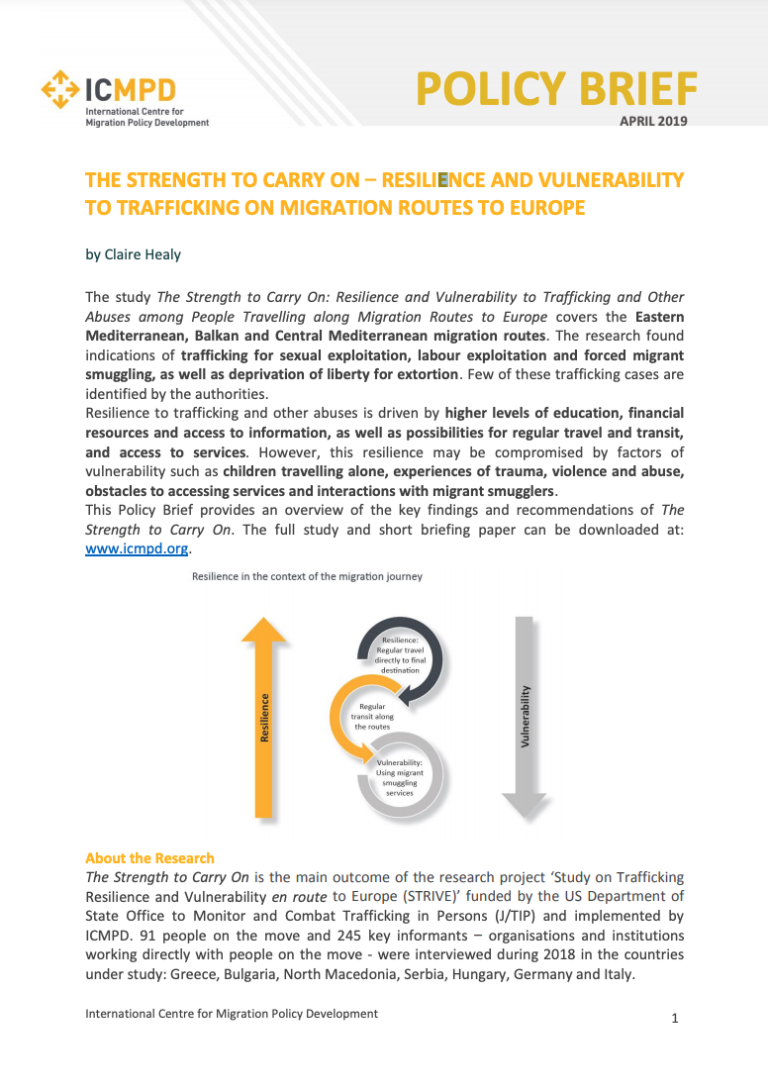 The Strength to Carry On: Resilience and Vulnerability to Trafficking and Other Abuses Among People Travelling Along Migration Routes to Europe (Policy Brief 1) - International Centre for Migration Policy Development, 2019 DOWNLOAD 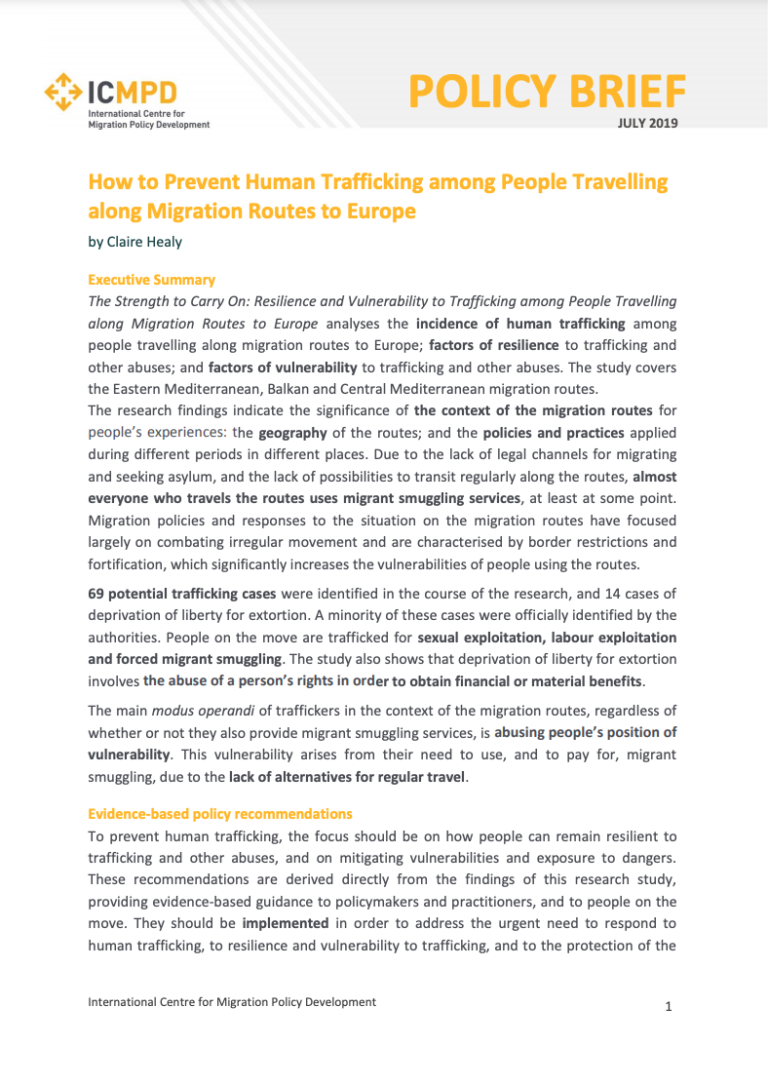 The Strength to Carry On: Resilience and Vulnerability to Trafficking and Other Abuses Among People Travelling Along Migration Routes to Europe (Policy Brief 2) - International Centre for Migration Policy Development, 2019 DOWNLOAD

Model Law against Trafficking in Persons

The UNODC Model Law against Trafficking in Persons was developed by theUnited Nations Office on Drugs and Crime (UNODC) in response to the request of the General Assembly to the Secretary-General to promote and assist the efforts of Member States to...Read More

Almost 21 million people (a conservative estimate) are trapped in conditions of forced labor that generates over $150 billion in profits for other parties. Of these workers, over 75% are exploited within the traditional private sector, esp...Read More

Undress Corruption – How to Prevent Corruption in The Readymade Garment Sector: Scenarios from Bangladesh

The tragic event at Rana Plaza on April 24, 2013 drew the attention of the world to the conditions prevailing in the ready-made garment sector of Bangladesh. In its wake, over 150 European textile companies signed a legally binding agreement to main...Read More

Large infrastructure and industrial Projects can have adverse impacts on people and on the environment. As financiers and advisors, we work in partnership with our clients to identify, assess and manage environmental and social risks and impacts in ...Read More