The Human Trafficking and Exploitation (Scotland) Act 2015 (“the Act”) introduced new offences, gave police and prosecutors additional powers to tackle traffickers, raised the maximum penalty for trafficking to life imprisonment, and placed support for victims on a statutory basis. It also required that Scottish Ministers develop and publish a Trafficking and Exploitation Strategy (“the Strategy”), and this was done in May 2017.

The Strategy was developed through a process of co-production. Extensive consultation with partners, stakeholder organisations and the general public was undertaken, including a formal written consultation and engagement events across the country. A series of focus groups were held with survivors of human trafficking to ensure that their voices were reflected, and that they had an opportunity to influence the policies in the Strategy. 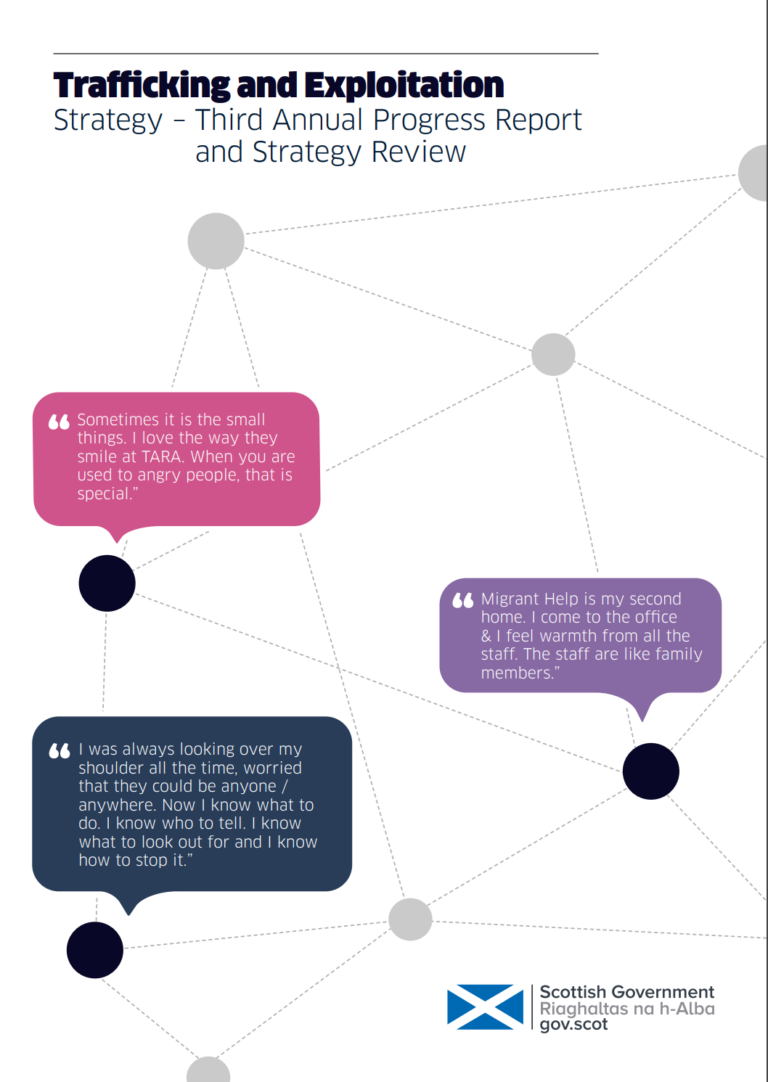 Slavery and Human Trafficking: Guidance for Businesses in Scotland

Human trafficking and exploitation are crimes that prey on the most vulnerable in society, both within Scotland and across the world. They are abuses of human rights that have life-changing negative impacts for victims. A Corporate Group has been established,...

Effectiveness of Mandatory Human Rights and Environmental Due Diligence

This Modern Slavery PEC Policy Brief is the second in a series of Policy Briefs to assess the evidence base on the effectiveness of different regulatory interventions to address modern slavery in global supply chains, a key research priori...Read More

Seefar and My Choices Foundation (MCF) are testing interventions that can help reduce the prevalence of Child Trafficking (CT) and Commercial Sexual Exploitation of Children (CSEC) among 12–18-year-olds in 3 targeted districts of We...Read More

Predictable and preventable: Why FIFA and Qatar should remedy abuses behind the 2022 World Cup

When FIFA awarded the 2022 World Cup to Qatar in 2010, the existence of widespread labour rights abuses was well-documented. FIFA knew, or ought to have known, that the monumental construction work and other services required to host the tournament ...Read More

The Strength to Carry On: Resilience and Vulnerability to Trafficking and Other Abuses Among People Travelling Along Migration Routes to Europe

Around one and a half million people have travelled along the ‘Eastern Mediterranean route,’ the ‘Balkan route’ and the ‘Central Mediterranean route’ since 2015, in order to enter an EU country and apply for asylum or remain without regu...Read More