Modern slavery is the very antithesis of social justice and sustainable development. The 2021 Global Estimates indicate there are 50 million people in situations of modern slavery on any given day, either forced to work against their will or in a marriage that they were forced into. This number translates to nearly one of every 150 people in the world. The estimates also indicate that situations of modern slavery are by no means transient – entrapment in forced labour can last years, while in most cases forced marriage is a life sentence. And sadly, the situation is not improving. The 2021 Global Estimates show that millions more men, women, and children have been forced to work or marry in the period since the previous estimates were released in 2017.

Through the adoption of the Sustainable Development Goals (SDGs), the global community has committed to ending modern slavery among children by 2025, and universally by 2030 (Target 8.7). This report underscores the scale of the challenge facing the global community in the short period remaining to meet these ambitious targets.

Compounding crises – the COVID-19 pandemic, armed conflicts, and climate change – in recent years have led to unprecedented disruption to employment and education, increases in extreme poverty and forced and unsafe migration, and an upsurge in reports of gender-based violence, together serving to heighten the risk of all forms of modern slavery. As is usually the case, it is those who are already in situations of greatest vulnerability – including the poor and socially excluded, workers in the informal economy, irregular or otherwise unprotected migrant workers, and people subject to discrimination – who are most affected.

It is urgent that the global community gathers the will and resources to overcome these obstacles and get progress towards ending modern slavery back on track. Promises and statements of good intent are not enough. While the principal responsibility for change lies with national governments, a whole of society approach is needed – the social partners, participants in the social and solidarity economy, businesses, investors, survivor groups, civil society, and an array of other actors have critical roles to play. Technical cooperation and assistance from UN agencies, other multilateral and bilateral organizations, international non-governmental organizations, and other groups will also be important to progress. Social dialogue provides an essential framework for building lasting, consensus-based solutions to the challenge of modern slavery.

The global and regional estimates presented in this report were developed by the International Labour Organization (ILO), Walk Free, and the International Organization for Migration (IOM). The estimates are based on a jointly developed methodology summarised in the Annex and described in detail in the methodology report produced along with this 2021 Global Estimates report. As was the case for the 2016 global estimates, the 2021 calculations are derived from multiple data sources, as no single source was sufficiently reliable. The principal sources are data from nationally representative household surveys – 68 forced labour surveys and 75 forced marriage surveys – jointly conducted by ILO and Walk Free, as well as the Counter Trafficking Data Collaborative (CTDC) anonymised case dataset on victims of trafficking collected by IOM and its partners in the process of providing protection and assistance services to trafficked persons. 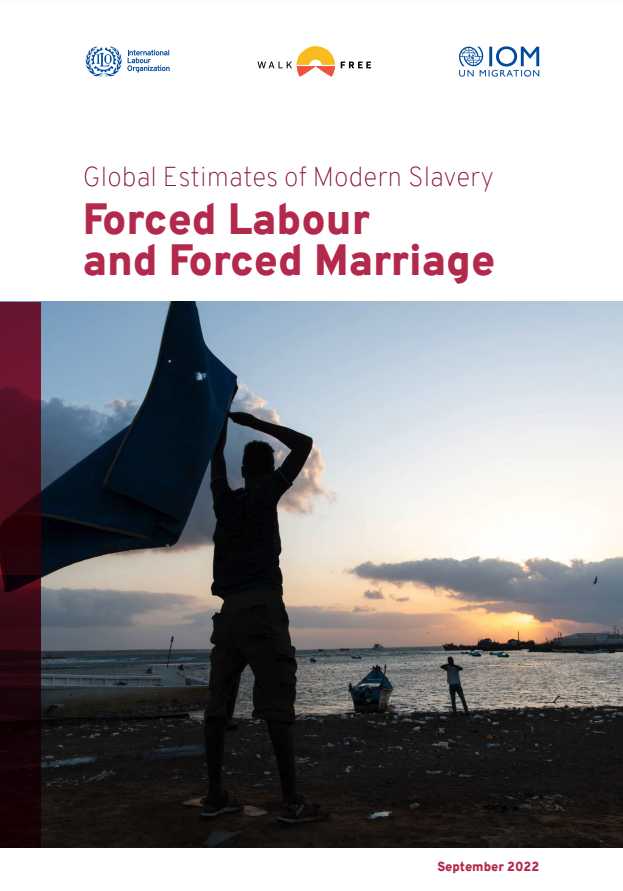 COVID-19: Access Challenges and the Implications of Border Restrictions

The COVID-19 pandemic has required States to implement exceptional measures to curb the spread of the virus and to protect public health. While border restrictions or closure may be justified, exceptions are needed to safeguard basic rights, includi...Read More

In August 2019, Stop the Traffik Kenya (STTK) and Freedom Collaborative (FC), a project operated by Liberty Shared, had conducted a data collection exercise with civil society organizations (CSOs) in Kenya, to report on known human trafficking and h...Read More