Understanding and Responding to Modern Slavery within the Homelessness Sector

The Passage To Ending Homelessness, 2017

Homelessness organisations and anti-slavery organisations have both been aware of links between modern slavery and homelessness, yet there has been little research into how these issues overlap and impact on one another. An initial scoping exercise was, therefore, commissioned in 2016 by the UK’s Independent Anti-Slavery Commissioner, Kevin Hyland OBE, to gain a better understanding of modern slavery within the homelessness sector. The Passage, a leading homelessness charity, was appointed to look into this issue.

Using an online survey completed by 61 organisations throughout England, two focus groups in Birmingham and London, and semi-structured interviews with various other relevant organisations, it has been found that homeless people are at risk of being exploited when they are on the streets, and victims of modern slavery are at risk of becoming homeless if no long term support is provided to them. A set of recommendations has been developed to address some of the issues identified through this exercise in order to improve the multi-agency response to modern slavery. 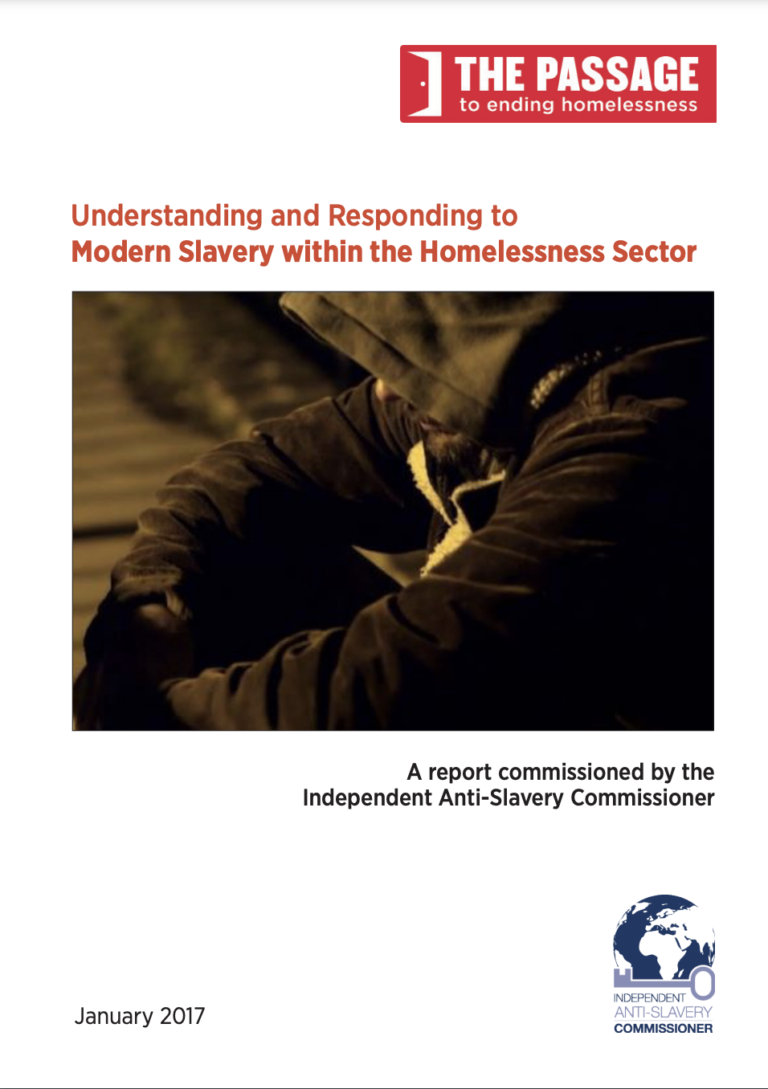 Understanding and Responding to Modern Slavery within the Homelessness Sector - The Passage To Ending Homelessness, 2017 DOWNLOAD

We believe that everyone should read this handbook – and we have kept it small so that you can keep it in your work bag or desk drawer. This handbook was, however, specifically created for staff who work in the...

This handbook was specifically created for staff who work in the homelessness sector, particularly frontline workers, managers and volunteers. People who are engaged in support services for homeless people can be vital eyes and ears in detecting this crime. In...

This report depicts The Passage Anti-Slavery Project’s first two years, from June 2018 to June 2020. The first section of the report describes the project’s objectives, the steering group which guided the project and its main key achievements. The achievements...

Seefar and My Choices Foundation (MCF) are testing interventions that can help reduce the prevalence of Child Trafficking (CT) and Commercial Sexual Exploitation of Children (CSEC) among 12–18-year-olds in 3 targeted districts of We...Read More

The following information is based on incoming communication with the National Human Trafficking Hotline from January 1, 2016 – December 31, 2016 about human trafficking cases and issues related to human trafficking in South Carolina. ...Read More